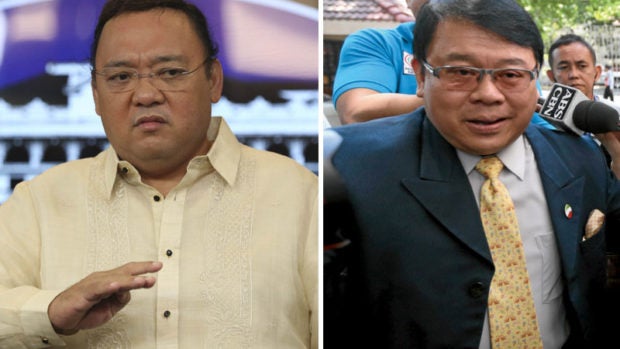 One of the lawyers of former Palawan governor Joel Reyes called on Presidential Spokesperson Harry Roque on Saturday not to use his position to push for cases he had personally handled as a private lawyer.

“He should choose—does he want to be presidential spokesman or he wants to continue his private practice?” lawyer Ferdinand Topacio said during the Saturday Forum at Annabel’s Restaurant in Quezon City.

“We find it objectionable that the former lawyer of the Ortegas, who’s now a member of the Cabinet, will use the bully pulpit of his position to promote cases which he has personally handled,” Topacio said.

(We are wondering who Secretary Roque was representing when he spoke about the case.)

Roque was a lawyer of broadcaster and environmentalist Gerry Ortega, who was killed allegedly due to his strong anti-mining advocacy. The principal suspect in the Ortega slay case is the former Palawan governor.

The spokesperson earlier said in an interview that he would meet Solicitor General Jose Calida and Justice Secretary Vitaliano Aguirre II to appeal the recent decision of the Court of Appeals (CA) nullifying the finding of probable cause and the issuance of an arrest warrant by the Puerto Princesa Regional Trial Court (RTC) against Reyes.

The spokesperson said that he had asked President Rodrigo Duterte’s permission to talk publicly about his opinion on the matter. However, Topacio said that Roque should not have done it in the first place if he was “loyal” to the President and respects his position.

“He should not have had even tried, it was unseemly, it was improper. He displayed grave lack of delicacy,” he added. /jpv

Read Next
LIST: Cancelled flights on Saturday, Jan. 13, 2018
EDITORS' PICK
Heads may roll at BOC, says Palace if sugar smugglers are allowed to use recycled import permits
What to watch out for when selecting a video surveillance solution
Palace: Biggest supermarkets in PH commit to sell sugar at P70 per kilo
House energy committee chair Arroyo bats for cheap electricity
vivo brings to the Philippines a powerful smartphone with a slimmer body, the vivo Y02s for only PHP 6,499
Climate change impact: Deadlier diseases
MOST READ
DepEd to give teachers P5K cash allowance within first week of classes
Alyssa Valdez to miss Creamline’s AVC Cup campaign
Mayor bares issues vs closed QC school
DOJ indicts bank officer in $2.1 billion Wirecard fiasco
Don't miss out on the latest news and information.