Traslacion ‘faster’ thanks to year-long planning 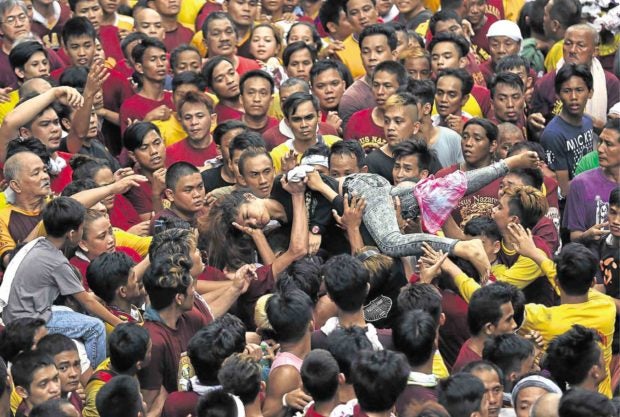 In a rock concert, this is called crowd-surfing. But that’s not the case for this woman, one of the Black Nazarene devotees who fainted due to heat and exhaustion amid the multitudes who took part in Tuesday’s grand procession in Manila, known also as the “Traslacion.” —LYN RILLON

This year’s “Traslacion” moved much faster compared to the snail-paced procession in 2017, based on the assessment of the police.

As a result, the carriage of the Black Nazarene was expected to return to Quiapo Church two hours earlier compared to last year’s Traslacion which lasted 22 hours, according to Philippine National Police chief, Director General Ronald dela Rosa.

The spokesperson of the Manila Police District attributed the faster pace to effective crowd control measures that were implemented in 12 areas along the procession route.

“The police implemented minor changes by preventing devotees from clogging certain routes even before the ‘andas’ (the carriage bearing the Nazarene image) passed through those streets,” Supt. Erwin Margarejo told the Inquirer on Tuesday afternoon.

The planning for crowd control and security measures for this year’s celebration of the Feast of the Black Nazarene took about a year.

According to Margarejo, talks among stakeholders started on Jan. 10 last year, or a day after the feast day, so that they could immediately determine their mistakes and how these could be avoided in the future.

Margarejo said that this year, the organizers made sure that the crowds would be restrained on streets where the carriage of the Black Nazarene would pass through.

In previous years, people would wait in areas where the andas was expected to pass and then swarm around it, preventing it from moving forward. 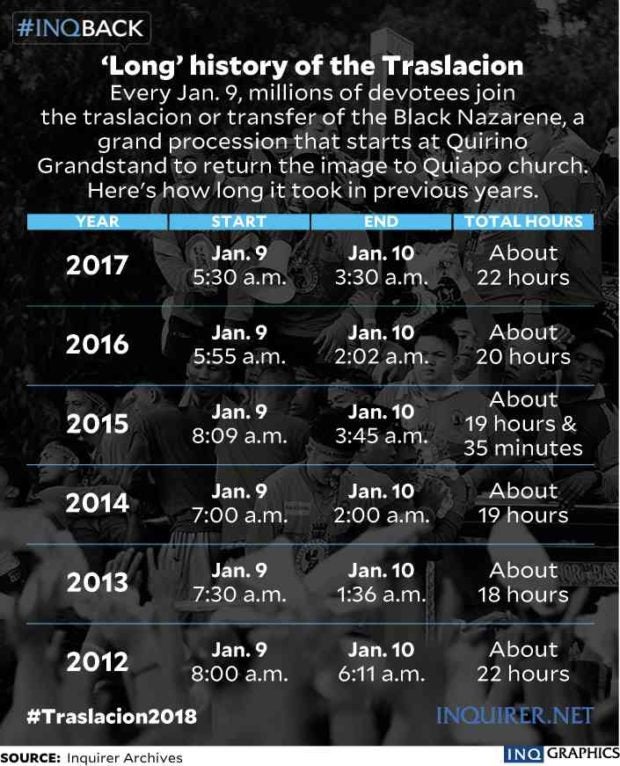 The year-long planning also gave the police enough time to determine how they could prevent devotees from trying to climb up the carriage even before the end of the traditional morning Mass at the Quirino Grandstand. This commotion often delayed the start of the procession.

“This year the mass ended peacefully [since] the barricades we placed there were really effective,” Margarejo said.

The procession started at 5:07 a.m. with the number of people at the Quirino Grandstand estimated at 95,000.

By 9 a.m., the procession was already in front of Manila City Hall. By 1 p.m., it had reached Quinta Market and was approaching Quezon Boulevard around an hour later.

At 6 p.m., the procession had entered Arlegui Street on its back way to the Quiapo Church where around 400,000 people were waiting.

As a countermeasure against possible terrorist attacks, a signal interruption of cellular phone services within a one-kilometer radius of the procession route was enforced.

The Philippine Red Cross said that as early as 10 a.m, it had already attended to 465 people who complained of dizziness, difficulty in breathing, cuts, bruises and other minor injuries. —With a report from Krixia Subingsubing