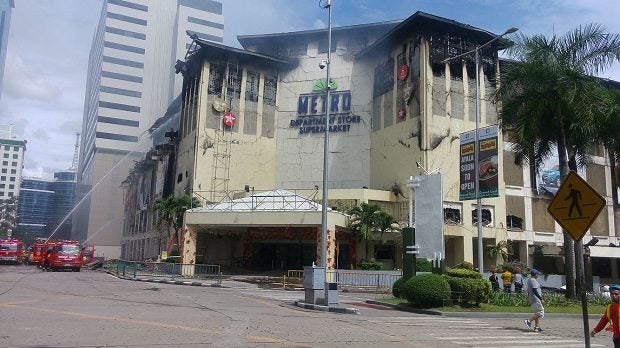 The Associated Labor Unions-Trade Union Congress of the Philippines (ALU-TUCP) on Sunday called for a fire safety audit of shopping malls across the country following reports of widespread violation of fire safety standards by property owners.

The proposal came in the wake of the Dec. 23 fire that tore through the four-story New City Commercial Center (NCCC) shopping mall in Davao City that killed 38 people, 37 of whom were workers at a 24-hour call center operated by the US research company Survey Sampling International (SSI) on the top floor of the building.

The group’s call also came as firefighters battled a blaze at the Metro Department Store and Supermarket on the third level of Ayala Center in Cebu City.

The fire was put out at 12:45 p.m. on Sunday, 39 hours after it broke out late on Friday. No casualties were reported.

How safe are malls?

“Fire safety audit to all [shopping] malls is important because workers work here, and children, old folks and entire families [frequent] malls. It is the place for work, recreation and business,” Alan Tanjusay, ALU-TUCP spokesperson, said in a statement on Sunday.

“[Malls] have become very important places in the community, but how safe [are] our malls in the light of the recent fatal [fires]?” he added.

TUCP president Raymond Mendoza said a nationwide inspection to be conducted by the Department of Labor and Employment and the Bureau of Fire Protection would greatly minimize shopping mall fires.

Tanjusay suggested the safety audit inspections be conducted before summer, the fire season in the Philippines.

The ALU-TUCP has expressed outrage over alleged violations of fire safety rules at NCCC Mall and SSI in Davao City and noncompliance with occupational safety and health regulations, which caused the deaths of 38 people in the 32-hour fire that dampened Christmas celebrations in President Duterte’s hometown.

“It is outrageous to see another fire incident taking place in … Cebu City when just 15 days ago, 38 workers perished in [the] NCCC Mall fire in Davao City. These are not isolated incidents,” Mendoza said.

He said violation of fire safety standards among property owners were widespread, compromising the safety of shoppers and workers.

“These [fires] are symptoms of the wanton disregard of department store owners to go around our building safety laws and ignore workplace policy on workers’ health and safety. We have to find out [how safe other shopping malls in the country are],” Mendoza said.