The casket of Karl Anthony Nuñez, 20, lies on the same spot inside their house on Pajero Street, Barangay Sun Valley, Parañaque, where he was shot dead by gunmen last Dec. 26, 2017. (Photo by DEXTER CABALZA / Philippine Daily Inquirer)

Bernadette Nuñez was clutching two plane tickets back to Dubai in United Arab Emirates where she has worked for 17 years – one for her and another would have been for her youngest child, 20-year-old Karl Anthony Nuñez.

On Sunday, however, she was not taking any trip. Instead, she and her family laid Karl to rest at Loyola Memorial Park in Parañaque.

They wore white shirts and head bands written with “Justice for Tutoy,” Karl as he was fondly called, claiming his death was another case of extrajudicial killing.

According to a police report, Karl was able to run inside their house but was still chased by the shooter.

“When we woke up, we just saw Tutoy lying on the ground with gunshots in the body and head, blood pouring from him,” Bernadette recalled.

Police officers who arrived that noon told her the shooting might be a case of “mistaken identity.”

They said the suspects might be vigilantes looking for a robbery suspect called “Carlo Daga.”

Neighbors said that Carlo had not been living Sun Valley “for a long time.”

“Who told them that? As far as I am concerned, our investigation has no leads on that,” Rosete said. 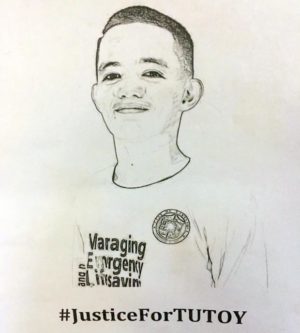 At his burial on Sunday, Jan. 7, 2018, the family and friends of Karl, fondly called Tutoy, wore white bands and shirts calling for justice for his death. His family said he was not involved in drugs or any criminal activities, and was a actually a model son – a good basketball player, a volunteer rescuer and a youth leader in the making. (Photo by DEXTER CABALZA / Philippine Daily Inquirer)

He added that the only update they had on the case as of Sunday was through a closed-circuit television footage they had obtained. It showed a motorcycle riding tandem on Pajero Street at around 4 a.m. on Dec. 26.

“As if we could make up such stories,” Bernadette said. “That–s what the police said and that’s what people here are saying.”

Karl’s shooting had no witnesses except for the Nuñez couple, who could not identify the assailants as both were wearing helmets.

When news reached her in Dubai that teens ended up killed on the streets back in the Philippines, Bernadette was quick to warn her children, especially Karl.

“I always told him to be careful because anyone could be killed,” she said. “He reassured me that he was fine, that he was not into drugs or anything. That he was a law-abiding citizen. But God, look at what happened to him?”

What took up most of Karl’s time was playing basketball. His friends called him “most valuable player” and he was waiting for him to be selected as a varsity team member at Arellano University, where he was in his second year as a Hotel and Restaurant Management major.

At other times, he would be riding his motorcycle with other motorcycle enthusiasts. While on the road, Bernadette said, Karl would be helping those who had met accidents as he was also a volunteer rescuer.

He even planned on running for the next Sangguninang Kabataan elections as he would want to help more people in their community, his mother said.

“We just can’t accept the fact that our son’s life was lost just like that,” she said. “Why did they slaughter him like a pig? He wasn’t a criminal.”

Hundreds of friends and those whom Karl had helped flocked to the Nuñez house, sharing stories of him, until the wee hours of Sunday.

“I am at peace, because he was loved by everyone,” Bernadette said.

In one of the tables, Karl’s former classmates aty Sun Valley National High School were sharing food and drinks.

They had posted a a sketch of Karl on a seat, as if Karl was with them.

“Karl kept bugging us that we should have a reunion as early as possible,” said his friend Mark, who had traveled from Rizal. “We did it. It’s just unfortunate that it was on his wake.”

Last Christmas, Karl and Bernadette completed the nine-day Simbang Gabi, a novena of Masses that ended on Christmas Eve.

According an old saying, those who complete the nine-day series of Masses Old will have their wish granted.

“After the Mass, I asked Tutoy what his wish was,” Bernadette recalled. “At first he said it was a secret, but later on gave in and told me: ‘I just don’t want to see you cry anymore.’ And he just fell asleep on my lap while scratching his back.”

“Justice here in our country is elusive, but I believe Tutoy will be true to his wish,” she said. /atm

Read Next
More than 800 street sweepers to be deployed for Traslacion
EDITORS' PICK
Tips for a cheerful life
Petecio ‘blessed’ as Olympic gold quest continues
Philippines to bring home multiple Olympic medals for first time since 1932
Connect to PH’s fastest network with new Signature Plan Lite at only P599 per month
Nesthy Petecio assured of Olympics bronze, ousts Colombian foe
Harnessing technology for quality education
MOST READ
Isko for 2022? Manila mayor takes a swipe at Duterte on live broadcast
Nesthy Petecio assured of Olympics bronze, ousts Colombian foe
Lacson bares talks with Robredo ahead of 2022 polls
Gordon in talks with Robredo for possible ‘partnership’ ahead of 2022 polls
Don't miss out on the latest news and information.