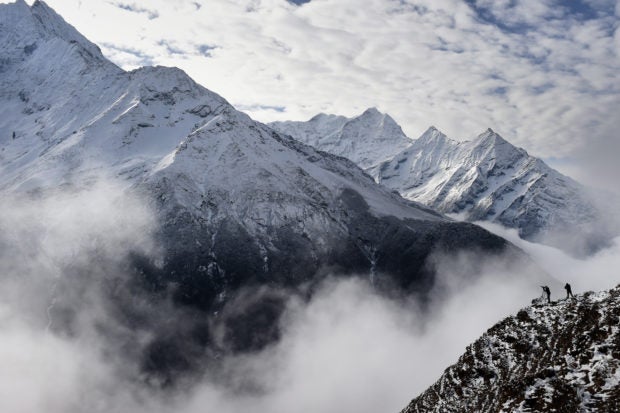 Agence France-Presse reporter Ammu Kannampilly (2R), and Nepalese guide Pasang Sherpa (R) stand on a ridge over a valley leading north into the Khumbu region as they try to get a clear view of Mt. Everest on April 18, 2015.  AFP FILE PHOTO

The National Federation of the Blind and the World Blind Union represent the US and global blind communities, respectively.

Last Thursday, the Cabinet’s Bill Committee approved an amendment to the Mountaineering Expedition Regulation under the Tourism Act, prohibiting double amputees, persons without arms and legs and blind persons from attempting to climb the world’s tallest peak.

The regulation, guided by an attempt to prevent accidents and climbing deaths, will be officially implemented after it is published in the Nepal Gazette. The government has also barred individual foreign climbers from making an attempt on any peak in the country without a guide.

“The National Federation of the Blind is surprised and disappointed that Nepali authorities have banned blind people from participating in expeditions on Mt Everest,” said Mark Riccobono, president of the federation.

“While we recognize that this climb should not be undertaken by the unprepared or inexperienced, the ban on blind climbers is arbitrary. The first blind person to attempt this climb, Erik Weihenmayer, summited on May 25, 2001 in an expedition that we were proud to sponsor. This proves that blindness, by itself, does not prevent a climber from safely summiting Mt Everest,” he added.

“Despite the wide-ranging evidence of our capacity, however, society continues to arbitrarily restrict what we may do, and low expectations continue to create artificial barriers that prevent us from fully participating in our communities. There is no more evidence that we should not climb Mt Everest than that we should not walk the streets with our white canes, ride amusement park attractions, or raise children, all of which are things that some have tried to prevent us from doing, but which many of us have done successfully,” Riccobono said in a press statement.

“Nepali authorities should immediately rescind the ban on blind climbers and should reconsider banning any other climbers with disabilities,” he said.

Likewise, Sudarshan Subedi, president of the National Federation of the Disabled – Nepal, warned that if the government did not correct its decision, they would be forced to seek legal remedies. “It’s discrimination. We are doing homework and will soon release our official words. The government cannot seize our rights guaranteed by the constitution,” he said.

The Disability Rights Act passed by the Legislature-Parliament last August prohibits all kinds of discrimination on the basis of disability with the provision of action and punishment against such practices.

The issue will also be tabled at the 19th session meeting of the Committee on the Rights of Persons with Disabilities scheduled to be held in Geneva on February 14, said Subedi. The federation, an umbrella body of persons with disabilities, represents more than 300 member organizations working for promoting the rights of disabled people throughout the country.

The Convention on the Rights of Persons with Disabilities is an international human rights treaty of the United Nations which Nepal has signed to protect the rights and dignity of persons with disabilities.

Some mountaineering officials said that the decision was taken in haste. Everest climbing records show that fewer physically challenged climbers have been involved in accidents as they often hire more climbing guides for their safety compared to other climbers.

“Physically challenged people climb mountains safely in accordance with their guide’s instructions. They don’t climb to set a record. They don’t insist that their mission should be accomplished at any cost, and this kind of demand has resulted in the deaths of many,” said an experienced Everest climber who did not wish to be named.

Similarly, double amputees have a better safety record. “Past records have shown that climbers with prosthetic legs walk faster than other climbers on Everest as they don’t have to wear mountaineering boots weighing 4-5 kg,” said the climber.