Trump threatens to cut off US aid to Palestinian Authority 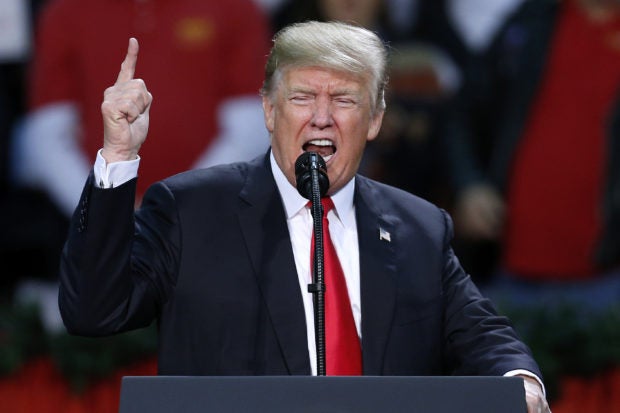 WASHINGTON, United States — President Donald Trump is threatening to cut off U.S. aid money to the Palestinian Authority and acknowledging that the Middle East peace process appears to be stalled.

Trump says in a pair of tweets that, “we pay the Palestinians HUNDRED OF MILLIONS OF DOLLARS a year and get no appreciation or respect. They don’t even want to negotiate a long overdue … peace treaty with Israel.”

He adds that, “with the Palestinians no longer willing to talk peace, why should we make any of these massive future payments to them?”

Trump infuriated many when he announced late last year that the U.S. would consider Jerusalem the capital of Israel and move its embassy there.

Trump has long said he wants to broker Mideast peace, calling it “the ultimate deal.” /cbb

Read Next
Domestic flights cancelled due to bad weather
EDITORS' PICK
Heads may roll at BOC, says Palace if sugar smugglers are allowed to use recycled import permits
What to watch out for when selecting a video surveillance solution
Apple warns of flaw that lets hackers into iPhones, Macs
House energy committee chair Arroyo bats for cheap electricity
46% of schools nationwide to have full face-to-face classes on Aug. 22
vivo brings to the Philippines a powerful smartphone with a slimmer body, the vivo Y02s for only PHP 6,499
MOST READ
DepEd to give teachers P5K cash allowance within first week of classes
LOOK: Miel Pangilinan dazzles in glittery pre-debut shoot
DOJ indicts bank officer in $2.1 billion Wirecard fiasco
PH importing sugar after all: Marcos okays 150,000 MT
Don't miss out on the latest news and information.