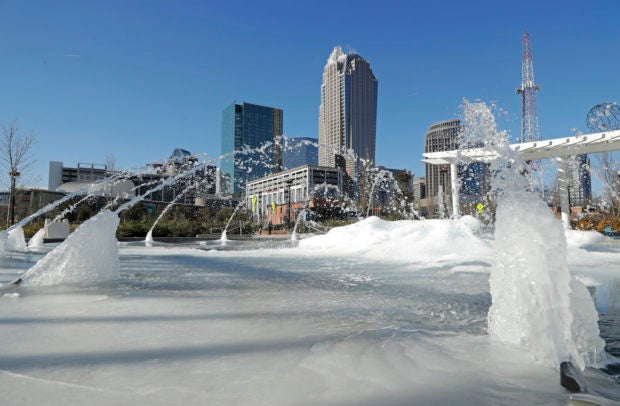 Water squirts from a frozen fountain near downtown Charlotte, North Carolina, Tuesday, Jan. 2, 2018. Temperatures plummeted overnight to 2 degrees in the north Georgia mountains, 14 in Atlanta and 26 as far south as New Orleans as the Gulf Coast felt more like Green Bay. AP

INDIANAPOLIS, United States — Dangerously cold temperatures blamed for at least nine deaths have wreaked havoc across a wide swath of the U.S., freezing a water tower in Iowa, halting ferry service in New York and leading officials to open warming centers even in the Deep South.

Indianapolis early Tuesday tied a record low of minus 12 degrees Fahrenheit (-24 Celsius) for Jan. 2 set in 1887, leading Indianapolis Public Schools to cancel classes. And the northwest Indiana city of Lafayette got down to minus 19 (-28 Celsius), shattering the previous record of minus 5 (-21 Celsius) for the date, set in 1979, the National Weather Service said. After residents there began complaining of a hum, Duke Energy said it was caused by extra power surging through utility lines to meet electricity demands.

“The temperatures are certainly extreme, but we’ve seen colder,” said Joseph Nield, a meteorologist in Indianapolis, noting that the all-time low temperature in Indiana was minus 36 (-38 Celsius) in 1994.

Nevertheless, the cold is nothing to trifle with, forecasters warned.

With Chicago-area wind chills expected between -35 and -20 degrees (-37 and -29 Celsius), forecasters warned of frost bite and hypothermia risks and urged residents to take precautions, including dressing in layers, wearing a hat and gloves, covering exposed skin and bringing pets indoors.

In Tennessee, corrections officials at a maximum security prison were using portable heaters and extra blankets to keep inmates and employees warm. The facility lost hot water pressure Monday, causing its boiler to go offline. A spokeswoman didn’t provide a timeline for its return.

Atlanta hospitals were seeing a surge in emergency room visits for hypothermia and other ailments as temperatures plunge well below freezing. The temperature in Atlanta fell to 13 degrees (-11 Celsius) before dawn in Tuesday.

“We have a group of patients who are coming in off the street who are looking to escape the cold — we have dozens and dozens of those every day,” said Dr. Brooks Moore, associate medical director in the emergency department of Grady Health System, which operates Georgia’s largest hospital in Atlanta.

The cold is blamed in at least nine deaths in the past week.

The Milwaukee County Medical Examiner’s Office said two men whose bodies were found Sunday showed signs of hypothermia. Police believe the cold weather also may have been a factor in the death of a man in Bismarck, North Dakota, whose body was found near a river.

Warming shelters were opened across the South as freeze watches and warnings blanketed the region, including hard freeze warnings for much of Louisiana, Mississippi and Alabama. Temperatures fell to 8 degrees (-13 Celsius) near Cullman, Alabama, and 20 degrees (-7 Celsius) in Mobile, Alabama. Georgia saw one of its coldest temperatures of the winter: 2 degrees (-17 Celsius) shortly before dawn at a U.S. Forest Service weather station at Toccoa, Georgia.

Plunging overnight temperatures in Texas brought rare snow flurries as far south as Austin, and accidents racked up on icy roads across the state. In the central Texas city of Abilene, the local police chief said more than three dozen vehicle crashes were reported in 24 hours.

And in Savannah, Georgia — where the January’s average high is 60 degrees (16 Celsius) — the temperature hovered at 30 (-1 Celsius) at noon Tuesday, cold enough for icicles to dangle from the ornate wrought-iron fountain in Forsyth Park at the edge of the city’s downtown historic district.  The city could see up to 2 inches (5 centimeters) of snow and sleet on Wednesday, the first measureable snow since February 2010.

“I’ve never seen icicles in Savannah, period,” said Sean Dempsey, a local restaurant manager who wore a hat, gloves and a thick coat to walk his dogs Tuesday. “I’m pretty sure last year at New Year’s lots of families were in the park playing catch, Frisbee football and stuff like that.”

Dempsey said he expects his restaurant will still open on Tuesday, though he predicted many Savannah businesses will close.

“Basically, this town will kind of shut down,” Dempsey said.

The Waterloo suburb of Evansdale lost water service for a time Monday after temperatures fell to minus 20 degrees (-29 Celsius). Mayor Doug Faas said Tuesday that water was being run directly from the wells into the system, bypassing the suspected ice blockage in the tower.

A city staffer is expected to climb the tower later Tuesday to see what’s wrong and determine how to fix the problem.

Arctic temperatures also caused problems on waterways, for both waterfowl and boats. Firefighters in Richmond, Virginia, freed a swan that was stuck for hours Monday in the middle of a frozen pond.

In New York, transportation officials suspended the Newburgh-Beacon commuter ferry service on Tuesday because of icy conditions on the Hudson River. Just north, the city of Poughkeepsie saw a record-breaking low of minus 10 degrees (-12 Celsius) on New Year’s Day.

Now forecasters are tracking a storm that could bring snow and ice to the East Coast later this week. /cbb

Read Next
Trump threatens to cut off US aid to Palestinian Authority
EDITORS' PICK
Look Through: The fate of impounded stray dogs
House energy committee chair Arroyo bats for cheap electricity
What to watch out for when selecting a video surveillance solution
23,000 cops to be deployed nationwide for school reopening
Unleash the photographer in you this World Photography Day with vivo smartphones
DOH says COVID-19 cases plateauing, but public shouldn’t be ‘complacent’
MOST READ
Sharon Cuneta asks for prayers for friend in ICU who suffered silent stroke
Light therapy could be the answer to your sleep problems
Korina Sanchez reunites with former ABS-CBN co-anchors Julius Babao, Cheryl Cosim
PBA: San Miguel ousts Meralco to arrange finals duel vs TNT
Don't miss out on the latest news and information.