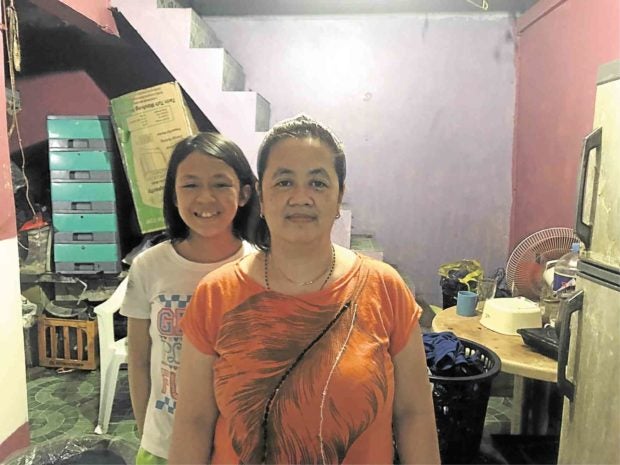 It has been almost 28 months since University of Manila freshman Renzo Rei Bodoy, 17, was killed in a jeepney robbery in Quiapo, Manila, on Sept. 8, 2015.

At first, it was very difficult for his mother, Rosebelle Bodoy, 47, to deal with losing an offspring and raising two more daughters alone.

“It was really a hard experience for me when Enzo died. Ang sakit [It was painful]. My children were not able to study after their brother’s death,” said Bodoy, a market vendor.

But she could do little else and just had plod through the grief of losing someone who could have helped her deal with poverty.

“My brother said he dreamed of becoming a chef, that he will work hard for us. He was very caring,” said Enzo’s 11-year-old sister, Rovi Anne. Rosebelle’s other daughter is Rose Ann, now 17.

One day last January, she was surprised upon returning home to see SPO3 Jonathan Bautista, who investigated his son’s killing two years before, at her door in Pandacan, Manila.

But Bautista was with a Caucasian, who introduced himself as Robert McCrum from New York and said he had been looking for her for a long time. “We are here to help you,” McCrum said.

Thought it was a prank

“I did not believe at first because I didn’t know (McCrum). I thought it was a prank. There were so many (broken) promises from people during my son’s wake,” Bodoy told the Inquirer in a recent interview.

McCrum said he was about to return to New York when he read about Renzo’s killing in the Inquirer and the story broke his heart.

“When I got home, I was angry at myself for not tracking the Bodoy family down,” McCrum told this reporter in an e-mail.

“I am a Christian and the Lord wants me to help. The reason God gives some people more than they need is to help those in need. That’s why I tried to find you,” he wrote.

McCrum first contacted Sister Rosa, a nurse from Bohol, and the nun found this reporter on Twitter.

“To actually see poverty struck me hard. It made me realize I wasn’t doing enough for the Lord Jesus Christ,” said McCrum, who first visited the Philippines in 2010.

McCrum has not missed sending the Bodoy family $300 every month since last January, Rosebelle said.

And McCrum asks nothing in return, Rosebelle said. “He is just there to help.”

“Through his help, we found hope. I was blessed. Maybe this is God’s answer to us,” she said. “As Sir Robert said, ‘the Lord is good. All problems will soon pass.’”

As for Renzo’s killer, Rosebelle appears content with the knowledge that he is already in jail. “I leave it to God,” she said.

“I hope other parents, mothers who lose their children will also be able to move on and forgive so that they will not lose hope and will have a fresh start,” she added.

McCrum said he would return to the Philippines in March to help out another family. “I am praying for the Filipinos,” he wrote in an e-mail. “I want you to glorify Jesus Christ, not me. He is the Lord. I am his servant. You are, too.”