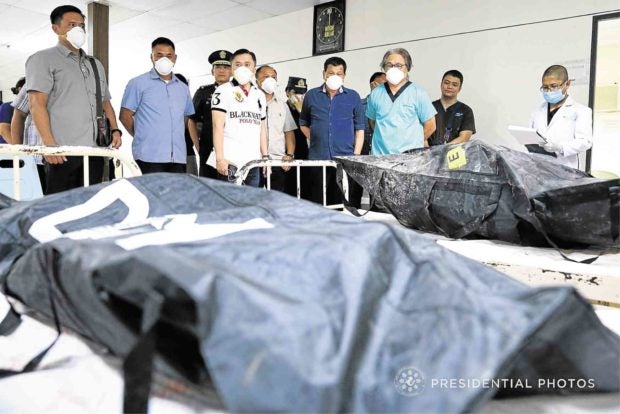 KILLED IN FIRE President Duterte views the bodies of those who died in the fire that gutted New City Commercial Center Mall at Southern Philippines Medical Center in Davao City. —MALACAÑANG PHOTO

DAVAO CITY—The militant Kilusang Mayo Uno (KMU) in Southern Mindanao on Tuesday called for a thorough investigation into the fire that tore through a shopping mall here on Christmas Eve, citing survivors’ complaints that pointed to violations of safety rules.

At least 37 people, all call center workers at the US market research company Survey Sampling International (SSI) Davao, were killed in the 32-hour fire that destroyed the four-story New City Commercial Center in President Duterte’s hometown.

The bodies of the victims have been recovered and Mr. Duterte has promised the families that he will get to the truth about the fire.

“What I assured them is that the truth will out. That’s what they want,” Mr. Duterte told reporters on Monday night after meeting with the families of the victims at Southern Philippines Medical Center, where the bodies were being autopsied and identified.

Mr. Duterte told the families that he would order the National Bureau of Investigation, Philippine National Police and Bureau of Fire Protection (BFP) to investigate the fire, which started at 9:30 a.m. on Saturday and was put out at 5:15 p.m. on Sunday.

The President said he could not confirm reports attributed to the city fire chief, Honeyfritz Alagano, that two other people, one of whom was a foreigner, remained missing.

The departments of justice and labor have announced separate investigations into the fire.

Carl Anthony Olalo, the KMU regional head, said information on how the fire started and how the SSI workers were trapped in the burning building was incomplete.

“Information spread through social media by survivors and concerned netizens pointed out [that] fire alarms and sprinklers did not function during the [fire], and no evacuation system was made to bring the SSI employees to safety,” Olalo said.

During the fire, he said, the call center employees could not call for help because their cell phones were held in one area of the office as part of SSI’s policy.

A city resident said she had seen firefighters doing nothing while the building burned. She said they told her that they had run out of water.

But Senior Supt. Wilberto Rico Neil Kwan Tiu, the BFP regional chief, said the firefighters did everything they could to save the trapped call center employees. “I’m really very sorry that we failed,” he said.

Kwan Tiu earlier described the building as “an enclosed space with no ventilation,” though the authorities said they had yet to determine the cause of the blaze.

“We made holes, we looked for ways in, we used ladders just to penetrate the locations as mentioned by colleagues, by employees who shared information that a group of people [was] in the rest room, near the elevator,” he told relatives of the victims during a Mass for the dead in front of what remained of the shopping mall on Monday.

He said firefighters drilled holes through the walls of the building to “ventilate thick, toxic smoke” so they could get inside.

Kwan Tiu said the firefighters had “unlimited water supply to put out the fire,” but temperatures of up to 700 degrees Celsius prevented them from entering the building.

He said more than 30 firetrucks from different fire stations and volunteer fire-fighting brigades in the Davao region responded as the blaze reached general alarm.

Firefighters reached the rest room mentioned by SSI employees on Sunday and found one body, identified later as that of Jeffrey Sismar.

The search for the other bodies was delayed for about three hours on Monday as the authorities assessed the integrity of the building to ensure the firefighters’ safety.

Toward noon, the firefighters found bodies, many of them charred beyond recognition, near the SSI lobby on the building’s top floor.

“I personally counted them before I gave the information to [Mayor Sara Duterte] … around 36 in number,” Kwan Tiu said.

Owned and operated by Lim Tian Siu Trading, whose owners are reportedly close to the Duterte family, the shopping mall was inaugurated in 2003, when Mr. Duterte was the mayor of Davao City.

But as indications of safety rules violations piled up on Tuesday, Mayor Duterte, a daughter of the President, declined to confirm that the mall owners were close to her family.

“About the alleged link between the Duterte family and the mall owners, I do not know what that means exactly. So
I do not think that deserves a reply,” the mayor said in a statement.

SSI also came under fire from the moderate labor group, Associated Labor Unions-Trade Union Congress of the Philippines (ALU-TUCP), over the deaths of the 37 call center workers.

Alan Tanjusay, spokesperson for the ALU-TUCP, said in a statement on Tuesday that SSI should be held liable, as its cost-cutting measures endangered its employees’ lives.

“If they complied with the labor standards on fire exits, sprinkler system, ventilation, lighting, noise, [ingress] and egress specifications and fire evacuation plan, possible harm could have been avoided,” Tanjusay said.

According to Tanjusay, there is a trend among call centers
in the Philippines to rent or lease space in shopping malls instead of constructing buildings specifically designed as round-the-clock work places.

“They do it to save cost and improve high margin of profit,” Tanjusay said.

The ALU-TUCP, he said, is urging the Department of Labor and Employment to order the transfer of all call centers to independent buildings to prevent a repeat of the SSI tragedy. —WITH A REPORT FROM AFP