Woman survivor swept by floods from Zamboanga to Antique 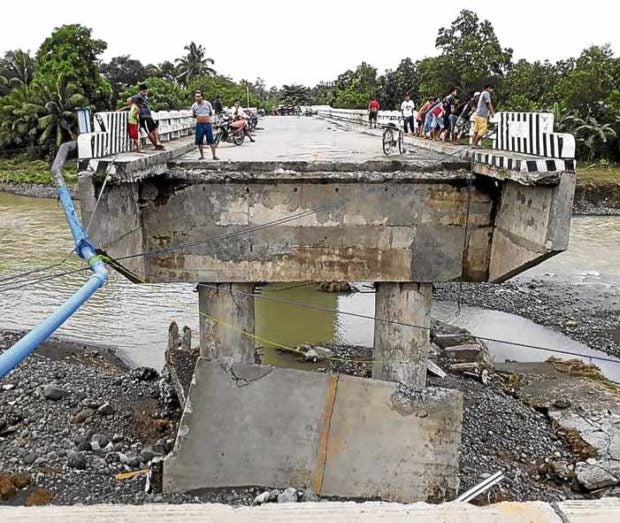 STORM’S FURY Tropical Storm “Vinta” cuts in half this bridge in Zamboanga del Sur (above)
and erodes land at 15 Maranao villages in Salvador town, Lanao del Norte (below). —AP AND RICHEL V. UMEL 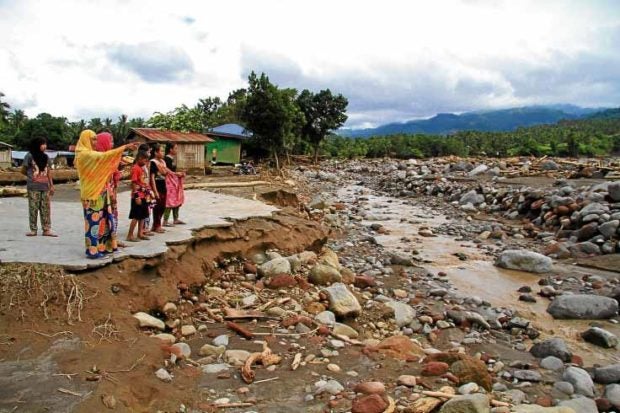 Mayor Norbideiri Edding of Sibuco, Zamboanga del Norte province, got a call from Mayor Elmer Untalan of San Jose, Antique province, that a Sibuco resident had drifted into the town’s waters after flooding carried her into the Sulu Sea.

Dianne Talling, 25, a teacher, was recuperating in San Jose, Edding said. “They will take care of our survivor. One of her cousins is still undergoing medical treatment in Zamboanga City.”

A state of calamity has been declared in at least 74 areas in Mindanao, including Davao City.

Across the island, more than 200 people have been confirmed dead, and search operations continue for more than 140 people reported missing.

A week after Vinta hit the country, nearly 95,000 people remained in 230 evacuation centers in five Mindanao regions and one region in Luzon, according to the Department of Social Welfare and Development.

More lives were lost as Vinta moved toward Palawan province on Christmas Day.

Two fishermen were killed and 70 others were rescued when huge waves smashed over their boat off Pamilikan Island near Mapun town in Tawi-Tawi province, officials said on Tuesday.

Rear Adm. Rene Medina, commander of the Naval Forces in Western Mindanao, said the Coast Guard found one of the fishermen dead but plucked 71 others from the sea around 9 a.m.

“Upon arrival at Mapun Pier, another fisherman died due to overfatigue. The rest of the victims were brought to Cagayan de Tawi-Tawi District Hospital for further evaluation and medication,” Medina said.

Tawi-Tawi Rep. Ruby Sahali said all the fishermen came from the Visayas and parts of Palawan. “They were fishing in our waters and Vinta caught up with them.”

In Lanao del Sur, Zia Adiong, crisis management spokesperson, said the provincial council declared a state of calamity in all 39 towns and Marawi City. Flooding killed 27 people in the province.

Lanao del Sur was still recovering from the recent terror attack by Islamic State-inspired groups that left more than 160 people dead when the floods and landslides took place, Adiong said on Tuesday.

He said the declaration of a state of calamity would expedite aid to 82,680 people in 18 towns.

Lanao del Norte recorded 117 deaths, according to the Provincial Disaster Risk Reduction and Management Council (PDRRMC), with the towns of Salvador and Tubod topping the list with 47 and 21 deaths, respectively.

The death toll could still rise as 98 people remained missing, the PDRRMC said.

A total of 19,189 people had to be evacuated at the height of the floods, which destroyed 804 houses, the PDRRMC said.

In Zamboanga del Norte, a state of calamity was declared in the towns of Siocon, Gutalac, Salug and Labason.

“The flash flood happened on the night of Dec. 22 and it has been four days now. We fear that these [missing] people may have already died,” Sibuco Mayor Edding said. He noted that of the missing reported across the province, 26 were Sibuco residents.

At least 30,000 people were displaced when floods and landslides hit Zamboanga del Sur, according to Vice Gov. Ace Cerilles.

The PDRRMC said damage to agriculture was more than P140 million and to infrastructure, P60 million. —REPORTS FROM JULIE ALIPALA, DIVINA SUSON AND ALLAN NAWAL IN MINDANAO; AND JAYMEE T. GAMIL AND JEANNETTE I. ANDRADE IN MANILA