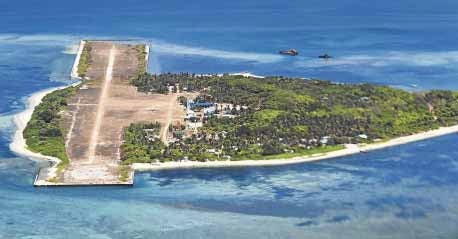 PAGASA Soldiers and their families live on Pagasa, the biggest
island in the Kalayaan Group. The island has an airstrip used by
themilitary in supplying the community. —PHOTO COURTESY OF PAF

The House of Representatives wants to encourage “permanent dwelling” in the Kalayaan Group of Islands, a 79-hectare chain of islets and reefs occupied by the Philippines in the disputed Spratly archipelago, by allowing residents and investors to obtain titles to the land.

The House committee on natural resources has approved House Bill No. 5614 that would declare the Kalayaan Group, which is part of the province of Palawan, “alienable and disposable” land for agricultural, residential and commercial purposes.

At a hearing before the Christmas break, the bill authored by Speaker Pantaleon Alvarez and Majority Leader Rodolfo Fariñas was approved by the panel after it was sponsored by Southern Leyte Rep. Roger Mercado.

In their explanatory note, Alvarez and Fariñas cited the urgent need to declare landholdings in the Kalayaan Group alienable and disposable to “promote permanent dwelling and develop a viable source of livelihood for the residents therein.”

The declaration will promote the growth of business opportunities and spur the development of trade and industry by attracting investors to the area, according to the House leaders.

Alvarez said the Kalayaan Group offered rich fishing grounds, and significant oil and natural gas reserves. It is “vital to the security and economic survival of the Philippines,” he said in the note.

He further said the municipality of Kalayaan was in the process of making new projects to promote tourism for the island group and inviting Filipino entrepreneurs to invest in Kalayaan.

But investors are “reluctant because the island group is inalienable and nondisposable for agricultural, residential and commercial purposes,” he said.

“Even residents who have been long tilling and developing the parcels of land within the Kalayaan Group cannot apply for title for their occupied area,” he added.

The small Ayungin (Second Thomas) Shoal and Rizal (Commodore) Reef are also part of the archipelago.

There is a small community on Pag-asa, composed of soldiers and their families. The island has an airstrip, used by the military in supplying the community.

Ayungin Shoal, also known as Ayungin Reef, hosts a small Philippine garrison aboard the BRP Sierra Madre, a rusting medical ship that the government grounded there in 1999 to mark the country’s territory in the Spratlys after China seized Panganiban Reef (Mischief Reef) in 1995.

The development plans include enhancement of the habitability of the islands, construction of a berthing space for Philippine Navy vessels and other vessels, upgrading of the defense structures of the islands, improvement of existing facilities, such as roads and airstrip, and provision of water and power facilities and communication equipment.

Any Philippine activity in Kalayaan, however, will surely draw an angry response from China, which claims nearly all of the South China Sea, including waters within the Philippines’ 370-kilometer exclusive economic zone called West Philippine Sea.

The UN-backed Permanent Court of Arbitration in The Hague, ruling in July last year in a case brought by the Philippines, invalidated China’s sweeping claims.

But Beijing, which did not take part in the arbitration, refused to recognize the ruling and went ahead building artificial islands on reefs in the Spratlys and topping them with military installations.

President Duterte, who came to power last year, has refused to assert the ruling, preferring improvement of diplomatic and economic relations with China.

Any construction in the Kalayaan Group will also violate a 2002 status quo agreement between China and the Association of Southeast Asian Nations (Asean) to maintain peace and stability in the South China Sea, although China goes on building in the waterway with impunity.

A government report posted on a website run by China’s National Marine Data and Information Service and the overseas edition of the ruling Communist Party’s People’s Daily says China has enhanced its military presence in the South China Sea and “reasonably” expanded the area covered by the artificial islands.

Apart from what it termed “large radar”—it is unclear if the report is referring to more than one—construction this year has included facilities for underground storage and administrative buildings.

In contrast, the Philippines has been forced to stop construction of thatch and bamboo shelters for fishermen on Sandy Cay, a sandbar not far from the Kalayaan Group, when China protested the activity as a violation of the status quo agreement with Asean.