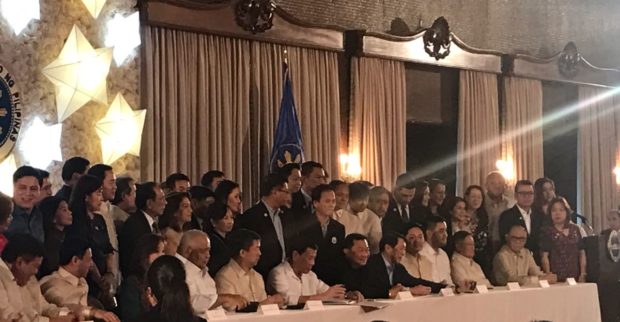 President Rodrigo Duterte on Tuesday signed into law the P3.77-trillion national budget for 2018 and the controversial tax reform bill.

The signing of the 2018 General Appropriations Act (GAA) and the Tax Reform for Acceleration and Inclusion (Train) bill was witnessed by government officials and lawmakers in Malacañang.

“This will also fulfill my campaign promise of doubling the basic pay of our soldiers and police officers, which will take effect on the very first day of 2018,” Duterte said in his speech at the signing ceremony of the two laws.

“Two laws that I signed today are the fulfillment of my campaign promise to institute genuine fiscal reform that will be felt by every Filipino,” he added.

The President said “the implementation of these laws will serve as our national, initial step towards cutting the poverty rate at 14 percent and making the Philippines an upper middle class by 2022.”

The Department of Public Works and Highways (DPWH) got the biggest allocation from the budget with P637.86 billion.

The Department of Education (DepEd) got the second biggest share of the budget with P553.31 billion.

As for the tax reform law, Duterte said it was the biggest gift of the government to Filipinos.

“This is the administration’s biggest Christmas gift to the Filipino people,” Duterte said in his speech after signing into law the Tax Reform for Acceleration and Inclusion (Train) Bill or Republic Act No. 10963,” he said.  /jpv

Read Next
Journalist gets death threat for broadcast critical of Isabelle Duterte photo shoot
EDITORS' PICK
House energy committee chair Arroyo bats for cheap electricity
Reignite your passion with the vivo Y35
Individuals affected by ‘Karding’ now over 157,000
Karding damage to infrastructure at P23M
Bongbong Marcos says PH ‘open for business’ with new Clark Airport terminal
Newbie gamers are in for a treat with the power-packed feature of vivo Y16
MOST READ
LPA enters PAR, may develop into tropical depression
Angelica Panganiban ‘duguan, sugatang mom’ one week into breastfeeding
Security guard shoots 2 other guards dead inside Makati subdivision
Badoy not with Office of the President, NTF-Elcac, under Marcos admin — solon
Don't miss out on the latest news and information.