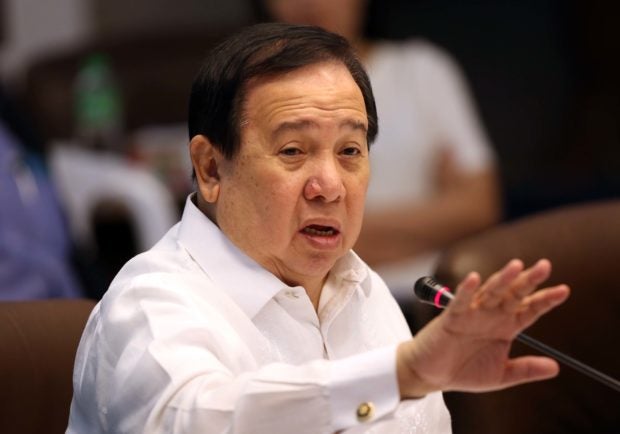 DECEMBER 14, 2017
Sen .Richard Gordon at the Senate probe into Dengvaxia, the dengue vaccine procured and used for an immunization program during the Aquino administration.
INQUIRER PHOTO/LYN RILLON

“They can say anything. It’s a free country.”

Senator Richard Gordon has this to say against netizens criticizing the way he handled last Wednesday’s Senate blue ribbon committee investigation into the Dengvaxia fiasco, which was attended by former President Benigno Aquino III and some of his Cabinet officials.

“It’s their (netizens’) right to say that. I respect them,” Gordon said in a phone interview on Friday.

Some netizens observed that Gordon had “dominated” and “monopolized” the hearing when Aquino and some of his former officials faced the Senate panel.

Without directly referring to the Senate probe, Aquino’s former spokesperson Abigail Valte tweeted while the hearing was ongoing: “Why invite resource persons when you don’t let them finish what they’re saying?”

Gordon, however, apologized to the critics, adding that the committee just needed someone who would just lay the facts of the case for the investigation to run smoothly.

Asked if he thinks it was unfair for some people to accuse him of monopolizing the hearing, Gordon said, “I think it’s lack of knowledge or understanding that somebody has got to lay the predicate or the facts of the case, and the issues involved and I think we did that.”

The senator said he even got feedback from some people he did not identify, asking him why he was “kind” toward Aquino during the probe.

“In fact, a lot of people are saying, “Why were you so kind to President Aquino?” Gordon said.

Aquino and some former cabinet secretaries were blamed for allowing the implementation of the P3.5-billion anti-dengue immunization program using Dengvaxia during his term. The Health department said it had been administered to over 700,000 patients, mostly children.

Some years later, French pharmaceutical giant, Sanofi Pasteur, admitted that the Dengvaxia vaccine might be potentially harmful to people not previously exposed to dengue virus. /jpv

Read Next
P.5M worth of shabu seized in Zamboanga City buy bust
EDITORS' PICK
Malls adjust ‘NCR Plus’ operating hours for April 12-30 MECQ
Speed up your game with the new vivo Y20s [G]
Pru Life UK receives four golden arrows for solid corporate governance
Metro Manila to have shortened curfew hours from 8 p.m. to 5 a.m. under MECQ
Pre-order the new vivo Y20s [G] to get a free TWS earphone
‘NCR Plus’ to be under MECQ starting April 12 until April 30 — Palace
MOST READ
Stop ‘creeping occupation’ of ‘militia’ boats in WPS, Pacquiao asks China
Bea Alonzo clarifies status of her relationship with Dominic Roque
Convicted former aide of Sen. Bong Revilla dies — BuCor
Locsin to China: ‘Then move out’
Don't miss out on the latest news and information.