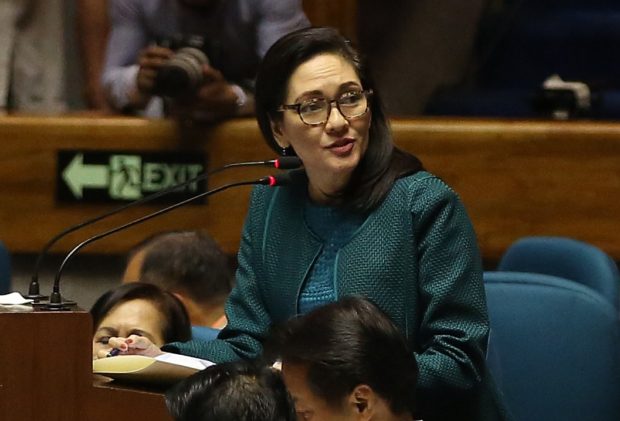 Senator Risa Hontiveros has expressed dismay at how the Senate investigation into the Dengvaxia fiasco is being handled, saying it should be done in a “more participatory and democratic manner.”

The Senate blue ribbon committee chaired by Senator Richard Gordon has been conducting hearings on the anti-dengue vaccine first implemented during the time of then President Benigno Aquino III.

“The Dengavaxia hearing could have been handled and managed in a more participatory and democratic manner wherein senators could have been given enough time to ask their own questions. After all, the blue ribbon committee is a collegial body,” Hontiveros said in a text message to reporters on Friday.

The senator was reacting to a reporter’s question through text regarding the committee’s proceeding when Aquino appeared for the first time in a congressional probe since he became president.

READ: Ex-President Aquino shows up at Senate for ‘Dengvaxia’ hearing

“Personally, I had a hard time asking questions because there was not enough latitude and flexibility,” Hontivero said.

“Despite that, I attended all the hearings, tried to be very patient and asserted my right to ask my own questions,” she added.

During the hearing, Senate Minority Leader Franklin Drilon pleaded at least twice to Gordon to allow him and other senators to ask their questions.

Aside from limited time given to committee members to ask questions, Hontiveros noted how the committee had allowed a “non-resource speaker” to participate in the hearing.

“I also thought it was improper to let a non-resource speaker speak before the hearing and let the individual cast aspersions against personalities and then ask the committee to look for evidence to support the unsubstantiated claims,” she said.

She was apparently referring to Ferdinand Topacio, lawyer of the Volunteers Against Crime and Corruption (VACC), who urged the committee during the hearing to file charges against officials of the past administration allegedly responsible for the botched P3.5 billion anti-dengue vaccine. /jpv