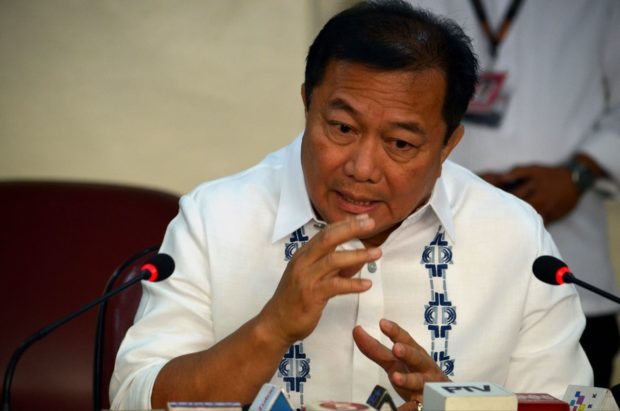 House Speaker Pantaleon Alvarez brushed aside the complaint filed by a group supporting Chief Justice Maria Lourdes Sereno at the Office of the Ombudsman in connection with the controversial airport terminal deal with Philippine International Air Terminals Co. Inc. (Piatco).

“That has long been dismissed,” Alvarez tersely said in a text message when sought for comment about the complaint filed by Pinoy Aksyon for Governance and Environment on Monday.

Pinoy Aksyon, which surfaced in October after impeachment proceedings against Sereno began gaining ground in the House of Representatives, asked the Ombudsman in a letter-complaint to investigate Alvarez for plunder, graft and violation of the Code of Conduct and Ethical Standards for Public Officials and Employees.

The group accused Alvarez of having business interests in a Piatco subcontractor, Wintrack Builders Inc., through his wife, Emelita. It claimed Wintrack was paid P132.5 million to clear below-ground debris at the Ninoy Aquino International Airport (Naia) compound without the benefit of a public bidding.

In early November, Pinoy Aksyon claimed “the people behind the impeachment complaint against Chief Justice Sereno are out for vengeance and ambition.”

Sereno herself, in a Nov. 20 television interview, said her lawyers were “considering” the possibility that this purported grudge could have influenced the impeachment proceedings against her.

She noted that she testified in the past on the “onerous terms” of the Piatco agreement, and Alvarez, when he was connected with the airport authority, “had a lot to do with the result of that bidding.”

In a statement, Pinoy Aksyon noted that the Supreme Court had remanded to the Ombudsman the plunder case filed by Manila International Airport Authority Association of Service Operators (Maso) against Alvarez and several others.

Maso had sought the high court’s intervention after then Ombudsman Aniano Desierto threw out the plunder complaint, according to Pinoy Aksyon convenor BenCyrus Ellorin.

Some of Sereno’s supporters claimed Alvarez wanted to get back at the chief magistrate for testifying in the Sandiganbayan in a separate graft case in connection with the Naia construction project.