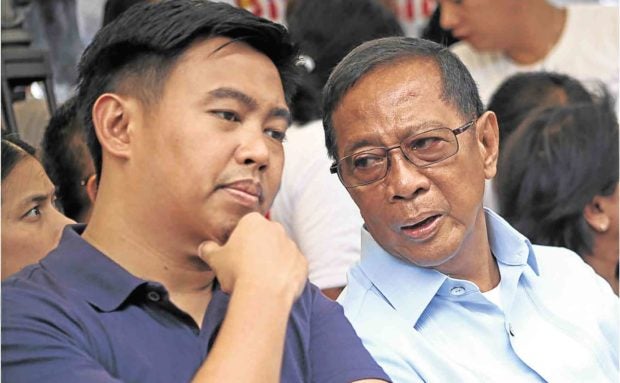 The Sandiganbayan has denied former Vice President Jejomar Binay’s appeal of its ruling that there is sufficient basis to try him for alleged irregularities in the construction of the Makati City Hall Building II during his mayoralty.

In a 27-page resolution dated Dec. 5, the court’s Third Division sustained its Aug. 31 resolution finding probable cause to set Binay’s graft and malversation cases for a full-blown trial.

Also denied were the appeals filed by his son, then Makati Councilor Jejomar Erwin Binay Jr., and 10 other co-accused.

With the court finalizing its finding of probable cause, it scheduled their arraignment at 1:30 p.m. on Jan. 12.

The court also rejected Binay Sr.’s argument that he should not have been covered by the Aug. 31 resolution because he never filed a motion for the judicial determination of probable cause.

The elder Binay is currently asking the Supreme Court to nullify the Ombudsman’s investigation of the case because it was conducted while he was still vice president and an impeachable official.

The Sandiganbayan, however, said it was duty-bound to personally evaluate the validity of the indictment, whether or not a motion for judicial determination of probable cause had been filed.

“Obviously, accused Binay Sr. operates on the erroneous belief that the court is precluded from determining the existence of probable cause (or the lack thereof) in the absence of a motion to such effect filed by him,” it added.

As for the others accused, the court said they merely “rehashed” their earlier arguments—that they were just performing their respective functions, there was no sufficient evidence to point to their culpability, they had no knowledge of any irregularity, and there was no conspiracy among them.

“The subject motions for reconsideration do not raise any new or substantial legitimate grounds or reasons to justify the reconsideration sought… The hard reality is that the accused-movants failed to raise matters substantially plausible or compellingly persuasive to warrant their desired course of action,” it noted.

According to the court, the accused’s arguments are “clearly matters of defenses which are better threshed out during the trial of these cases.”

The case arose from the alleged manipulation of the bidding for the contracts—through the use of questionable documents—in favor of MANA Architecture and Interior Design Co. and Hilmarc’s Construction Corp.

The architectural design and engineering services contract awarded to MANA amounted to P11.01 million while the contracts for the first three phases of construction which went to Hilmarc cost P1.486 billion.