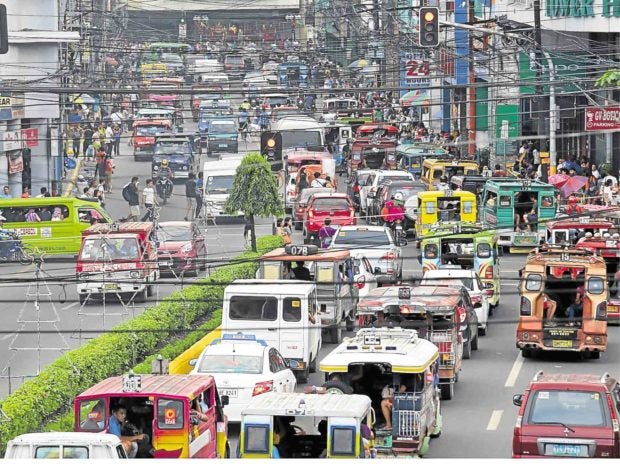 Officials of the Department of Public Works and Highways are hoping that a new expressway will ease Metro Cebu’s traffic jams. —JUNJIE MENDOZA / CEBU DAILY NEWS

CEBU CITY — A P50-billion road project that reduces travel time from the southern to the northern section of Cebu province to one hour is taking off next month.

The Department of Public Works and Highways (DPWH) in Central Visayas has allotted P300 million for the road right-of-way (RROW) acquisition and initial civil works for the 74-kilometer Metro Cebu Expressway.

“Starting January of 2018, our planning department will [begin] its parcellary survey to identify how many … trees and lots would be affected [by the project] so that we can pay them (owners for RROW acquisition),” said Marie Nillama, DPWH regional information officer.

Engineer Nonato Paylado, DPWH regional planning division head, said the initial allocation would be focused on Segment 3 of the three-phase project, which would run from Naga City to Minglanilla town.

This section, he added, was selected because it was less tedious and cheaper than the other segments due to existing barangay roads.

In May, Public Works and Highways Secretary Mark Villar announced the implementation of the Metro Cebu Expressway project that would cut down travel time from Naga City in the south to Danao City in the north from three hours to about an hour and decongest traffic in Metro Cebu’s cities.

Feasibility studies for the project had been completed earlier this year.

Villar projected that the project would be finished before President Duterte steps down from office in 2022.

While the project was funded by the government, Villar raised the possibility that the operation and maintenance of the expressway would be bid out to a private company.

The expressway is divided into three phases—from Talisay City to Cebu City and then to Mandaue City; from Consolacion to Liloan to Compostela to Danao City; and from Naga City to Minglanilla.

While no details had been released about the project, Paylado said the expressway would pass through mountain slopes.

“There is a proposal [to build] a tunnel but [this is] not final yet. It is along the section somewhere in the mountain village of Cebu City,” he said.

Nillama said the parcellary survey would determine how many trees would be affected by the project.

She said the inventory results would be sent to the Department of Environment and Natural Resources (DENR) regional office for the application of special tree-cutting permits.

Nillama said once the
DPWH received an authority from the DENR to cut trees, the agency would start constructing an opening road in Naga City.

The expressway will have four to six lanes and a center island.

According to Nillama, the center island will be used if there is a need to further widen the expressway.

“We are also seeing possibilities of constructing an underpass or an overpass if there are roads … obstructing the expressway’s construction,” she added.