DoTr willing to ‘bend a little’ on jeepney modernization program 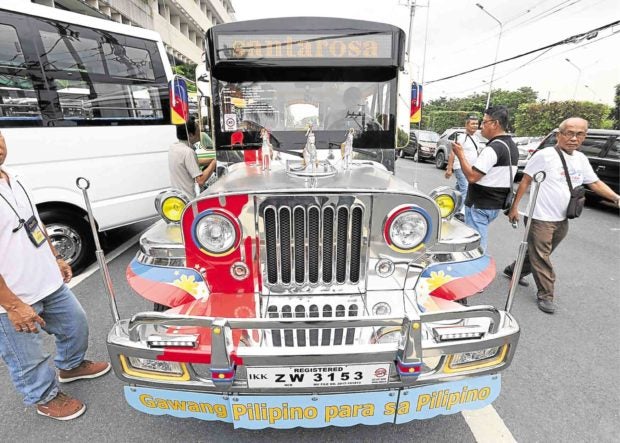 The new King of the Road is put on display in front of the Senate building. —MARIANNE BERMUDEZ

Sen. Grace Poe on Monday said the Department of Transportation (DOTr) could find a compromise with groups opposed to the jeepney modernization program by allowing old models that pass road-worthiness tests to continue plying their routes.

After listening to the concerns of transport operators and drivers on the looming phaseout of jeepneys and the DOTr’s response, Poe said it was clear there were still many things to be ironed out.

“First and foremost, where will the funding come from? As for the loan interest, maybe it can still be lowered. Third, the guidelines must be clear whether or not there are accredited suppliers or manufacturers of the [modernized jeepneys],” said Poe, chair of the Senate public services committee.

Poe earlier invited to a hearing Transportation Secretary Arthur Tugade and several transport groups led by Pinagkaisang Samahan ng mga Tsuper at Opereytor Nationwide (Piston) to try to “bring the issue from the streets to the negotiating table.”

The transport groups postponed their planned two-day strike last week to give way to the Senate hearing.

“Many of you have tried to thresh this out in several forums, and apparently everyone is sticking to [their] guns… Nobody wants to give in that’s why as we go along, expect me to prod many of you to move a little, give a little, so we can unknot this mess,” Poe said.

For his part, Tugade expressed his department’s openness to “bend a little and move a little faster.”

“But let it not be said that the minority should control and supersede the decision of the majority,” he said, pointing out that the jeepney modernization program was not outlined by one agency but the result of mutual consultation and deliberative processes.

Piston: No opposition if…

Piston president George San Mateo responded by saying they would not oppose the program if it would not unduly burden jeepney drivers and mainly benefit them and their operators.

However, he pointed out that the P80,000 subsidy from the government was insufficient and the six percent interest on loans offered by government banks for the purchase of a new jeepney was too much.

While Poe said a zero-percent interest was unfair, government banks could lower the interest rate to three percent or “anything below the market.” She also urged the DOTr to raise the government subsidy to P700,000 or at least half of the cost of the new jeepneys.