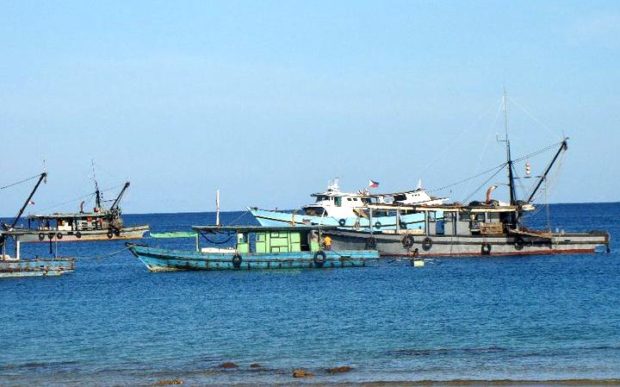 Fishermen catch fish in the waters of Turtle Islands, a protected area in the southern province of Tawi-Tawi. (Contributed file photo by Orlando A. Maliwanag)

The Philippine National Police (PNP) Maritime Group on Sunday said it was set to file a complaint against the owner of five commercial fishing vessels for illegally operating inside the Turtle Islands Wildlife Sanctuary in Tawi-Tawi.

Navotas-based operator Alex del Rosario is facing charges for violating several sections of the Fisheries Code of the Philippines (Republic Act No. 10654).

The Maritime Special Operations Unit caught five of his commercial-scale fishing boats operating near the islands of Taganak and Langaan in the morning of Dec. 1.

Giant clams were also among the items seized on the vessels.

Under the Fisheries Code, the use of fine mesh nets carries a maximum penalty of P 200,000 and an imprisonment up to two years.

Gathering of giant clams is also prohibited under the same law.

Meanwhile, the use of Danish Seine is prohibited under Fisheries Administrative Order 246.

Since the Turtle Islands is a sanctuary, Del Rosario may also be held liable for violating the National Integrated Protected Area System Act. /atm