Trees to give way to Cabinet home in Baguio 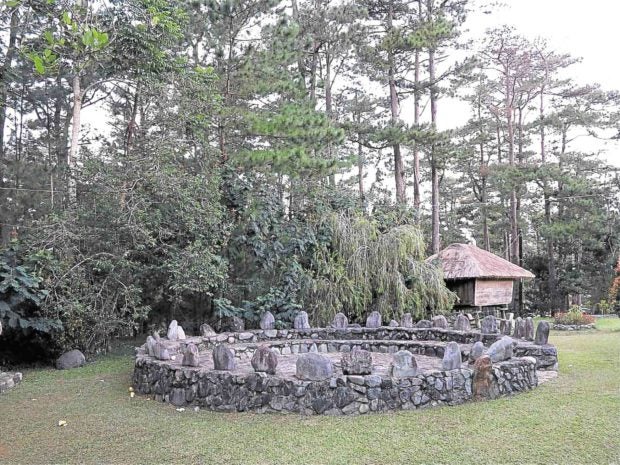 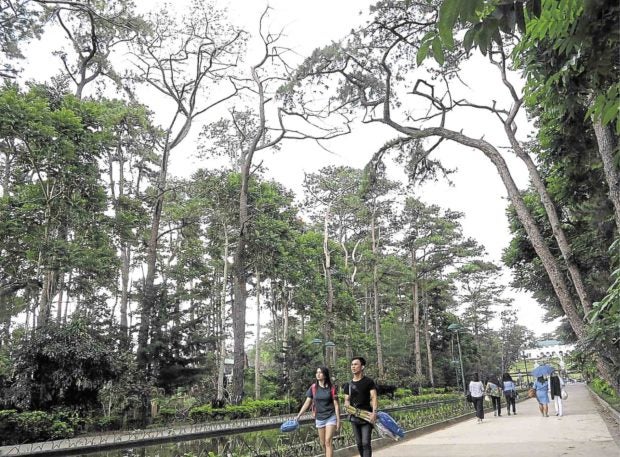 Balcony photo shows the familiar “dap-ay” (traditional meeting place in the Cordillera) and Ifugao hut at the Philippine Information Agency (PIA) grounds in Baguio City. (Above) Some of these trees at the PIA compound in Baguio’s Wright Park will be cut as the government builds a cottage for the executive secretary. —PHOTOS BY EV ESPIRITU

BAGUIO CITY — The Office of the President has asked the city government to allow 32 Caliandra trees to be cut to build a house for the Office of the Executive Secretary across the presidential Mansion here.

The proposed summer house will rise on Mansion land, which is near the forested Wright Park.

Environmentalists have been sensitive about development projects that require cutting of trees. They have protested the destruction of trees in a proposed mall and several condominium projects here.

But the Department of Environment and Natural Resources (DENR) said the trees marked for cutting were those planted by employees of the Philippine Information Agency (PIA) and were not part of the original forest cover at Wright Park.

The PIA has been holding office at the cottage that once housed former rebel priest, Conrado Balweg, and his militia after he and then President Corazon Aquino agreed to a ceasefire in 1987.

The building was renamed the Cordillera House and was recently proposed as a possible heritage site after Deputy Executive Secretary Rizalina Justol ordered its rehabilitation and conversion into the summer house of the executive secretary.

Like the Mansion, which serves as summer residence of Philippine presidents, almost all Cabinet secretaries have official houses built since the American colonial government transferred operations here in the early 1990s.

Many of these summer residences are clustered in what is now Cabinet Hill. But no Cabinet cottage has been reserved for an executive secretary.

Some Cordillera leaders have appealed for the preservation of the Cordillera House. But it does not fulfill the requirements for a heritage building which must be at least 50 years old, said Councilor Peter Fianza, a former city administrator.

He said the city government could petition for a marker to be installed at the area, indicating that the Cordillera House used to stand there.

The tree-cutting application was filed by Carlota Pauly, director of the Mansion, on behalf of the Office of the President, according to a DENR endorsement dated Nov. 14. The 32 trees to be cut are located on the right side of the PIA cottage.

The Office of the President said it would replace these trees with Benguet pine trees, according to the letter from Rainier Balbuena, city environment and natural resources officer (Cenro).

The Cenro asked Mayor Mauricio Domogan to issue the clearance required before the DENR could issue a tree-cutting permit. —Kimberlie Quitasol

Read Next
Tension grips Agusan plantation as land reform claimants bicker
EDITORS' PICK
Unemployment rate up to 6% in May
House energy committee chair Arroyo bats for cheap electricity
High-risk pregnancy: Reducing your risk is in your hands
High inflation: Your P1 is now worth only 87 centavos
UK’s Boris Johnson will resign, BBC reports
Geek out at TOYCON 2022 powered by Smart Signature
MOST READ
Suspect in grisly killing of missing woman in Bulacan arrested
Kim Atienza’s daughter flaunts bikini body in response to critics of her ‘revealing photos’
Japanese artist who created ‘Yu-Gi-Oh!’ found dead in the sea
FDA probes popular Filipino noodle brand for ‘high level of ethylene oxide’
Don't miss out on the latest news and information.