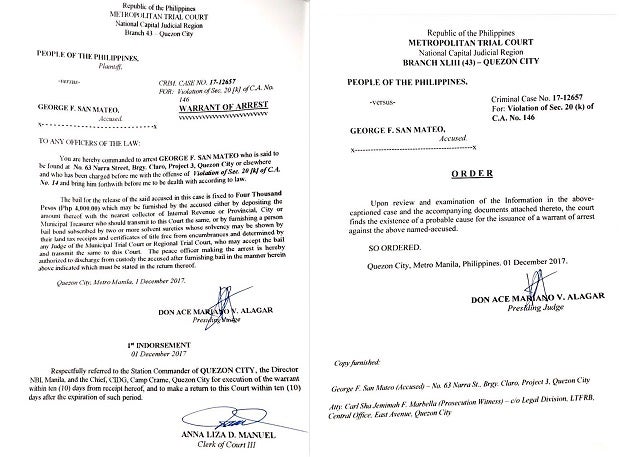 Branch 43 Presiding Judge Don Ace Mariano Alagar issued on Dec. 1 the warrant of arrest for San Mateo in relation to the transport strike led by Piston on February 27 against the jeepney modernization program, Radyo Inquirer 990 AM reported.

The Land Transportation Franchising and Regulatory Board (LTFRB) filed a case against San Mateo saying the strike caused inconvenience to commuters.

The LTFRB cited Section 20 (k) of Commonwealth Act No. 146, or the Public Service Act, which says that it is unlawful for any public service to “[a]dopt, maintain, or apply practices or measures, rules or regulations to which the public shall be subject in its relations with the public service.”

The court endorsed to the National Bureau of Investigation and PNP-CIDG the enforcement of the warrant of arrest.

The court set a P4,000 bail for the temporary release of San Mateo. /cbb