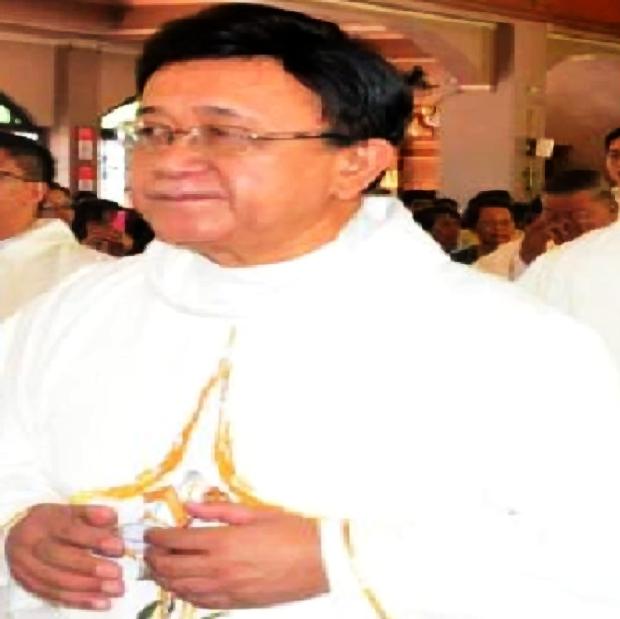 The Diocese of San Jose, Nueva Ecija province, on Tuesday condemned the murder of a retired Catholic priest who had served the diocese for 32 years.

Fr. Marcelito “Tito” Paez, 72, was shot by motorcycle-riding gunmen as he was driving through Sitio Sangalang at Barangay Lambakin in Jaen town on Monday night.

San Jose Bishop Roberto Mallari said Paez managed to stop his car and talk to the gunmen after being shot.

Mallari said Paez rolled down his car window and told the gunmen, “I’m a priest, I’m a priest.”

The gunmen sped off and Paez pulled to the roadside, Mallari said.

Paez died while he was being prepared for treatment at a hospital in San Leonardo town, also in Nueva Ecija, where he was brought.

Earlier on Monday, Paez helped secure the release of political prisoner Rommel Tucay in Cabanatuan City. Tucay was an organizer of Alyansa ng Magbubukid sa Gitnang Luzon in Nueva Ecija and was arrested by soldiers in March, according to the rights group Karapatan.

It demanded justice for Paez, who served in San Jose since the diocese was founded in 1984. He was on the social action commission and headed the justice and peace office.

Paez also served as coordinator of the Rural Missionaries of the Philippines in Central Luzon and as parish priest of Rizal town.

He retired in 2015 but remained active in working for the rights of the poor and farmers.

Mallari said Paez rose to the challenge of serving the people, “up to the point of offering [his] life.”

“This is also a challenge for us priests to be ready to stand for truth, justice, for the good of the people especially those who have no voice,” the bishop said on Church-run Radio Veritas.

The diocese urged the government to investigate the killing of Paez.

“We also appeal to the faithful to pray that justice will be served to Fr. Tito Paez and that his soul may find peace,” it added.

Malacañang said the authorities would investigate the killing of the priest and bring charges against people who would be found responsible.

Presidential spokesperson Harry Roque said there was no specific directive from the Palace on actions to take regarding the killing of Paez.

“But like all killings, they will be investigated by police authorities. And if there’s sufficient evidence to charge anyone, then authorities are duty-bound to file the necessary information,” Roque said in a news briefing.

He said he did not know yet if Paez’s killing fell under the Supreme Court’s definition of extralegal killing, which is the killing of a political activist or a journalist.

If found to fall under this category, the case would be handled by the interagency committee on extralegal killings, enforced disappearances and torture under Administrative Order No. 35, he said.

The Promotion of Church Peoples’ Response (PCPR), which counted Paez among its members, joined other churchworkers in condemning the murder of Paez.

“We condemn in the strongest term such cowardly and brutal act against church people. He is publicly known as an advocate of human rights, peace and justice not only in his diocese but in the country,” the PCPR said in a statement.

Fr. Robert Reyes, spokesperson for the religious group Gomburza, asked the leadership of the Catholic Church to speak up against extrajudicial killings.

“The Church must stand up and speak up and lead its flock in the battle against these works of evil that are happening around us. The Church should not be afraid,” Reyes said.

Gomburza, an organization of priests, nuns, religious brothers and the laity whose activism began during martial law under President Ferdinand Marcos, is a fierce critic of President Duterte.

Reyes warned that if the Church kept its silence, “more violence against the religious will follow.”

The Makabayan bloc in the House of Representatives also condemned the murder of Paez and the killing of religious leader Leovelito Quiñones in Mindoro Oriental province on Sunday.

“These attacks against the people who are only defending and asserting their rights must be stopped,” Bayan Muna Rep. Carlos Zarate said in a statement, citing information from Karapatan that 104 extrajudicial killings had occurred under the Duterte administration as of October.

In a separate statement, ACT Teachers Rep. Antonio Tinio described the killings as “part of the crackdown [on] progressive organizations” that President Duterte accuses of being in conspiracy with communist rebels.

“We hold President Duterte directly accountable for the further worsening state of human rights in our country from the thousands killed [in] his drug war to the killings of activists, critics and defenders of human rights,” Tinio said. —With reports from Leila B. Salaverria, Vince F. Nonato and Delfin T. Mallari Jr.  /kga /pdi