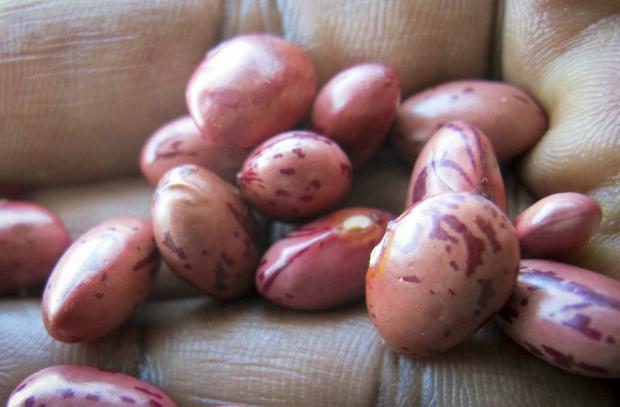 In this photo, taken Wednesday, Nov. 1, 2017, Ugandan farmer Richard Opio holds a sample of the “super beans” that are being promoted to feed the hunger-prone African continent, in Nwoya, Uganda. As hunger and climate change threaten parts of Africa, two bean “gene banks” on the continent are pursuing “super beans” that are bred to resist drought conditions. (Photo by RODNEY MUHUMUZA / AP))

NWOYA, Uganda — Richard Opio dipped a dirt-stained hand into the pinkish beans, marveling at the dramatic changes they’ve made for his family. They used to harvest two sacks of normal beans; now they take in six.

The so-called “super bean,” a fast-maturing, high-yield variety, is being promoted by Uganda’s government and agriculture experts amid efforts to feed hunger-prone parts of Africa. It’s also a step toward the next goal: the “super, super bean” that researchers hope can be created through genetic editing.

The beans that Opio now tends are thrilling farmers in this impoverished part of northern Uganda that also strains under the recent arrival of more than 1 million refugees from its war-torn neighbor, South Sudan.

The International Center for Tropical Agriculture says the beans have been bred by conventional means to resist the drought conditions that can lead to starvation as arable land disappears.

The group operates one of just two bean “gene banks” in Africa, which is expected to be hit hardest by climate change even though the continent produces less than 4 percent of the world’s greenhouse gases, according to the UN Development Program.

One “gene bank” is on the outskirts of Uganda’s capital, Kampala, where the beans that Opio now farms were bred. The other is in Malawi in southern Africa. Beans kept at the two banks are sent to partners in 30 countries across the continent to be developed further so they can cope with local conditions.

The Uganda bank stores around 4,000 types of beans, including some sourced from neighboring Rwanda before its 1994 genocide killed around 800,000 people and wiped out many of the country’s bean varieties.

“The beans have to go through certain rigorous tests before they can be released to the general public, to make sure they do actually address all the issues well and perform well in different climatic conditions,” said Stanley Nkalubo, a legumes research scientist with Uganda’s National Agricultural Research Organization.

The red-striped bean that 35-year-old Opio now harvests is called NABE15, and it has proved so popular that the UN’s Food and Agriculture Organization recently contracted a large commercial producer to supply 21 tons for distribution to South Sudanese refugees as planting materials.

Aid workers hope the beans will encourage the refugees to grow their own food rather than rely on handouts, which in some cases have been cut because of funding shortages.

“It is important that other sources of food be found to complement the food assistance,” said Beatrice Okello, senior program manager with FAO in Uganda, saying that just 50 kilograms of planting seeds are expected to yield of up to 2,000 kilograms of beans.

Experts say the “super” beans are valuable because they cook quickly and tolerate most diseases and pests. “It is also a shiny red color, which local consumers like, and it’s sweeter,” said Dr. Robin Buruchara, director of the Pan-African Bean Research Alliance.

On a recent morning, contractor Felix Otim watched as colleagues packed planting materials into FAO-branded bags destined for a nearby refugee camp. The beans will save many lives, he said. Instead of using 1 kilogram (2.2 pounds) of beans for lunch, planting it will multiply the benefit several times over.

Even the “super” beans aren’t perfect, but agricultural workers are looking to genetic tools for future solutions.

“It’s very hard to breed any single bean variety with the very best of traits — early maturing, drought-tolerant, pest-tolerant, high micronutrients. That would be the super, super bean,” said Debisi Araba, the African head of the Center for Tropical Agriculture. “But that’s what we are working toward. There are genetic editing tools available now that give scientists the ability to map out these genetic varieties and potentially we start looking at the possibility of breeding these super, super crops.”

For now, the “super” beans are finding a following in northern Uganda. After a neighbor noticed that Opio’s plants were performing well, he bought a sample. Now the beans are being traded across the border in turbulent South Sudan, where famine is once again a threat.

“So even though the target is farmer groups and organizations in Uganda, the beneficiaries are beyond the borders of Uganda,” Araba said.