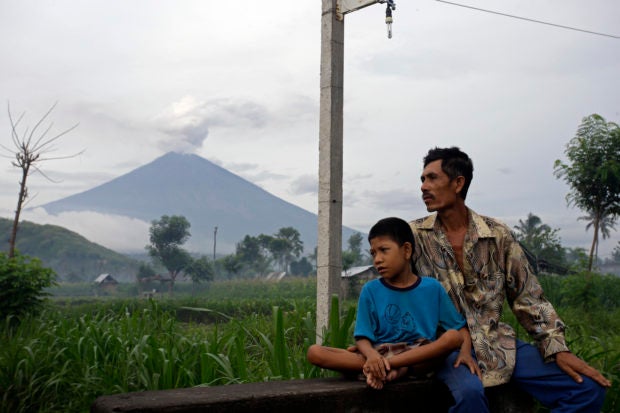 A father sits with his son with a backdrop of the Mount Agung volcano in Karangasem, Bali, Indonesia, Friday, Dec. 1, 2017. The island’s airport reopened Wednesday after being closed for 2 1/2 days and thousands of tourists are now leaving. About 40,000 residents from Mount Agung’s danger zone are staying in shelters. Ash could drift back and force the airport and to close again.(AP Photo/Firdia Lisnawati)

KARANGASEM, Indonesia—Australian tourists who complained about being stranded on tropical Bali when volcanic ash closed its airport have been roasted online as out of touch with the hardships faced by Indonesians forced to flee their homes.

Bali’s airport reopened Wednesday after being closed for 2 1/2 days and thousands of tourists are now leaving the island famous for its lush green interior, surf beaches and relaxed vibe.

About 40,000 residents from Mount Agung’s danger zone are staying in shelters such as sport halls, temples and tent camps. Ash could drift back and force the airport to close again.

A producer for an Australian television network temporarily locked her Twitter after being assailed for an article in which she complained of having to pay for a taxi to the airport after not getting through to airlines on the phone.

“People are being forced to measure risk, cost and desperation to make it home to their families on Christmas,” said the producer, Mary Jordan.

The article on the TV network’s website was later updated to show Jordan had managed to get a flight out for Thursday evening. But not before it was sarcastically dissected by an online travel guide.

One man was lampooned for telling Australian TV that the government should’ve sent boats to rescue Australians and complaining that he spent three “cold wet” nights at Bali’s airport.

“It’s been hell,” the man, identified as Phil Wickham by Australian media, said on arrival at Perth in Western Australia.

Others were more stoic, commenting that it wasn’t too bad and the beer hadn’t run out.

Australian television also showed emotional scenes at airports as relieved parents were reunited with teenagers that had been holidaying on Bali.

Bali attracts about 5 million visitors a year, making tourism vital to the livelihoods of many on the island. It is a top destination for Australians.

Arie Ahsanurrohim, a spokesman for Bali’s airport, said about 17,000 people flew out of Bali on Thursday on both domestic and international flights.

The small international airport on neighboring Lombok island reopened Friday after it too was closed for a day because of drifting ash.

Mount Agung, which has been gushing huge columns of black ash since Saturday and glowing red at night, remains at its highest alert level. Explosions within the crater can be heard kilometers away and tremors occasionally shake the surrounding region.

Bali volcano hurls ash for second time in a week