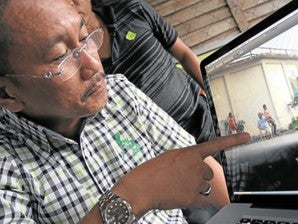 MANILA, Philippines—Other VIPS behind bars are getting special treatment, and Maguindanao Gov. Esmael Mangudadatu on Thursday showed pictures to back his contention.

Angered by the refusal of jail officials to allow prosecutors and members of the media to inspect the cells of the suspected masterminds of the November 2009 Maguindanao massacre, Mangudadatu presented photos showing Andal Ampatuan Sr. freely moving around the high-security prison in Camp Bagong Diwa, Taguig City.

“If you have the money, there is no law,” Mangudadatu, who lost his wife, sisters and other kin in the massacre, complained to reporters.

He said he had a “more explosive” video proving that Ampatuan Sr., the patriarch of the powerful clan and a former governor of Maguindanao, was enjoying special treatment from jail officials.

Earlier, tension ran high in the jail warden’s office when Mangudadatu, prosecutors, and other kin of the massacre victims insisted on an on-the-spot inspection of the Ampatuans’ cells at the maximum-security prison of the Bureau of Jail Management and Penology (BJMP).

“You do not want us to inspect the jail cells? Then I’ll come out with my evidence. I won’t be saying this if I did not have the proof,” the infuriated Mangudadatu said.

“With just this USB, the bureau could collapse. And I have a video that’s more incriminating,” he said, holding up the USB that had the digital copies of his photo evidence.

Mangudadatu showed the pictures to members of the media using his laptop. He said the pictures were taken this year but did not disclose who took them and how.

“OK, they won’t agree [to the inspection]? Let’s see who gets fired,” he said.

One photo shows Ampatuan Sr., wearing brown shorts and a blue shirt, sitting in the basketball court outside the prison building with 13 guests standing in front of him. High-risk prisoners are allowed only two guests at a time.

Another photo shows him, again in the basketball court, with a woman purportedly his wife. The woman is shown using a mobile phone, which is not allowed inside the prison compound.

A third photo shows Ampatuan Sr., still in the basketball court, with two men whom Mangudadatu identified as inmates acting as the patriarch’s masseur and cook and “who are also allowed to go out of their cells.”

Other photos show vehicles purportedly owned by the Ampatuans parked outside the prison compound.

“Their vehicles are also allowed inside the prison compound. It’s like they’re feasting,” Mangudadatu said. “What are they doing there when the guards are supposed to be strict about visiting hours?”

Private prosecutor Harry Roque claimed that two lawyers had seen Ampatuan Sr. at a five-star hotel in Pasay City, and that he had reported this to Interior Secretary Jesse Robredo.

“If they’re not hiding anything, why don’t they allow an inspection?” Roque said.

Mangudadatu said Robredo should conduct a full-blown investigation of the purported perks being afforded the Ampatuans by BJMP officials assigned to the prison camp.

“This is being done here,” he said. “Higher-ups, especially P-Noy (President Benigno Aquino III), would not have allowed this.”

But the warden, J/Chief Insp. Glennford Valdepeñas, denied that Ampatuan Sr. was being given special treatment.

Valdepeñas said he assumed his position only on April 7 and did not recall any instance of Ampatuan Sr. being brought to the basketball court.

But he pointed out that inmates were given time to exercise outside their cells under the prisoners’ welfare program.

Valdepeñas said he had not seen Mangudadatu’s pictures but that he was ready to be investigated.

He said defense lawyers had access to the inmates 24 hours a day and insisted that Ampatuan Sr. was never allowed to leave for a hotel during his watch.

“If that had happened, he wouldn’t have returned,” the warden said.

Defense lawyer George Narvasa said that if the prosecution had evidence that Ampatuan Sr. was being given special treatment, they should present it in court.

He added that the prosecution should get the proper authorization from the BJMP if it wanted to inspect the suspects’ cells.

But Judge Jocelyn Solis Reyes said on Wednesday that the prosecution could inspect the cells and only needed to coordinate with the BJMP.

“Yes, as long as proper coordination is made,” Reyes said.

Mangudadatu, the prosecutors, and the kin of the other massacre victims prepared a written request late on Wednesday.

They intended to conduct an inspection at around noon Thursday and went to the warden’s office to get his approval.

Valdepeñas remained in his room and did not meet with them.

The group waited for 20 minutes until a woman official relayed the warden’s decision: Only one lawyer from the prosecution and one from the defense could conduct the inspection.

“By now, they would have already been able to remove the movable air-conditioner and the [Internet] router upstairs,” Mangudadatu said.

Roque initially suggested that the group agree that only one lawyer from the prosecution go up to inspect the cells. But another private prosecutor, Gemma Oquendo, who lost her father and sister in the massacre, insisted that there should be two for security.

A defense lawyer, Arnel Manaloto, arrived and said that he would not allow an inspection. Manaloto was often seen sitting beside and talking with the principal suspect, Andal Ampatuan Jr., when the latter used to attend the trial hearings.

Mangudadatu and his brothers earlier identified the man as “Manaloto” but later said he was Philip Ang.

Narvasa said the defense team had no lawyer named Philip Ang but there was an Arnel Manaloto with them.

A check with the Supreme Court attendance sheet, which all trial attendees have to sign, showed no Philip Ang. But Manaloto’s name was there.

The massacre victims’ kin became furious when they noticed that Manaloto freely moved around the warden’s office. The lawyer was about to casually open the door to Valdepeñas’ room when they called him out.

“Kilalanin mo kami lahat (Look at us). We’re the victims. You should be helping us,” he said.

Governor Mangudadatu called out to Manaloto: “When did you bring a gun inside, Attorney?”

The brothers taunted Manaloto, saying he had become “a son” of Ampatuan Sr. and “a guard” in the prison compound.

“Let’s not insult each other. Let’s be civil,” Manaloto said before leaving.

The governor patted him on the shoulder as he was going out, but a relative of one of the victims gave him a pinch.

Oquendo said the jail officials had agreed to allow both private and public prosecutors to join the inspection. But the prosecution turned it down, saying that by then, “the Ampatuans would have been ready [to be inspected].”

At Thursday’s hearing, Ma. Cipriana Gatchalian testified how she and her four daughters suffered when her husband, journalist Santos Gatchalian, was killed in the massacre.

Her family is seeking at least P16 million in damages.

Judge Reyes said the trial would resume on June 1.

She is expected to issue today (Friday) a ruling on the motions to have Ampatuan Sr. and the other accused finally arraigned in court.

Read Next
Another bus hit Chit Estella’s cab first, say 2 witnesses
EDITORS' PICK
House energy committee chair Arroyo bats for cheap electricity
EDITORIAL: To a bike-friendly future
Pagasa: Warm, sunny Sunday in most parts of PH
The Best Tech Gifts For The 2022 Holidays
Is it safe to talk politics again at family gatherings? ‘The Reconciliation Dinner’ shows us what that’s like
vivo’s coming to town to grant wishes with more holiday promos
MOST READ
LOOK: Vhong Navarro transferred to BJMP detention facility in Taguig
The Elephant Man in the Senate
Posh village as ‘shabu’ haven
LOOK: Zanjoe Marudo bonds with Ria Atayde, her family
Don't miss out on the latest news and information.