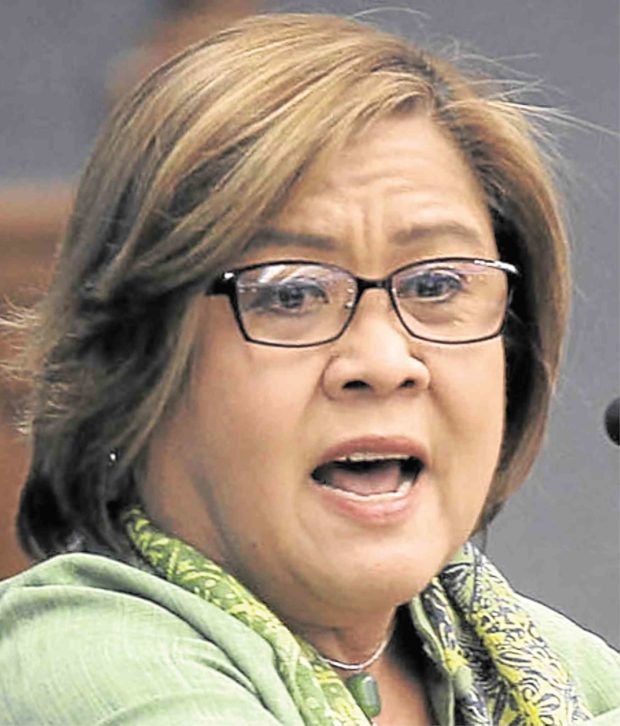 The country is in “shambles” and President Rodrigo Duterte is using “scapegoats” to cover up his failures.

Thus, said his nemesis, Senator Leila de Lima, who has been detained at the Philippine National Police headquarter in Quezon City for drug-related charges.

“Crisis management under the Duterte administration is all smoke and mirrors. With nothing to show after more than one year in office except blusters, blunders and scandals, Duterte has resorted to looking for scapegoats. And what better scapegoats are there than the favorite punching bags of the Duterte lynch mob, the Liberal Party (LP),” de Lima, an LP member, said in a statement on Tuesday.

“This regime thrives on projecting its failures to conspiracy theories and imagined enemies of the state, and to an all but decimated political opposition, after the great majority of the LP it is crucifying has already jumped ship and turned Dutertistas. It is blaming everyone but itself. This is what the charges against Aquino officials are all about,” she said.

The detained senator was still reacting to the charges filed against several Cabinet members of former President Benigno Aquino III over the MRT 3 mess.

De Lima said Duterte has to be told that Aquino is no longer the President.

“He (Duterte) is. The buck stops with him now. And no amount of speeches at an MRT station to blame detaching carriages on imagined saboteurs, or an MRT-commuting PR stunt of his spokesperson-cum-senatorial wanna-be, can change that fact,” she said.

“Duterte has to start solving problems soon, and fast. His lies about all his failures being the fault of the past administration will soon lose traction. After a while, say in two years, the blame game will no longer wash with the public. When that time comes, no amount of misdirection that harks back to an ancient circus, of feeding innocents to hungry lions, will satisfy the public anymore.”

But to those who refuse to be taken for a ride by Duterte, De Lima said, there was no need to point out the fact that “the nation is already in shambles” in just one year under the present administration.

“The much promised crime-free and corruption-free Philippines in six months remains to be an illusion. The peso continues its nose-dive, from one of Asia’s most stable currency before PNoy ended his term in 2016, to Asia’s worst performing,” she said.

“Without any increase in sources of revenue coupled with unmitigated administration spending, Duterte’s finance team is satisfied with managing the fiscal deficit through debt-financing, thus increasing foreign debt several fold since they started attempting to plug holes in a ship being sunk with trade imbalances, decreased foreign direct investments, and alarming inflation,” the senator added.

Indeed, she said, there are public officials who need to be sent “to the gallows for bringing this country to the brink of catastrophe.”

“The only question is should it be the officials who left government with billions of pesos in savings, billions of dollars in foreign reserves, a stable currency, and strong economic fundamentals, things that are the only reasons still keeping the country’s economy afloat? Or is it the current cohort of Duterte officials who has managed to bring a once robust economy to its knees all in a matter of one year?” de Lima asked.

“The writing is already on the wall. Government cannot be run with nothing but smoke and mirrors. There can be no substitute for competence and an international reputation as a stable regime led by a sober, rational and decent president,” she added.

De Lima was the Justice Secretary during the time of Aquino. /jpv

Read Next
NBI warns PNP over allegations vs agents in abduction of Korean national
EDITORS' PICK
Duterte signs law giving rights, more protection to foundlings
Comelec won’t proclaim party-list groups yet
Honolulu Café is the cure for your Egg Tarts and Roastings cravings
DOJ-led panel drops 29 cases of torture, EJKs
Luxe property: A way to build, preserve wealth
House energy committee chair Arroyo bats for cheap electricity
MOST READ
Heart Evangelista gets a ‘no’ from Chiz Escudero after asking, ‘Do I deserve a bag?’
BIZ BUZZ: Flip-flopping BIR
3 Iloilo residents found with Omicron subvariant
Man posing as Marcos spox revealed to be an inmate in Bilibid — Guevarra
Don't miss out on the latest news and information.