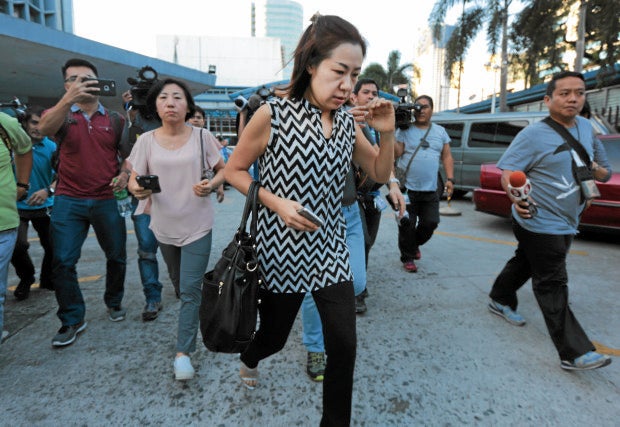 A year after her husband, South Korean businessman Jee Ick-joo, was killed by police in President Duterte’s war on drugs, Choi Kyung-jin’s question remains unanswered: “Why my husband?”

“I’m requesting the Philippine government to tell me why my husband and who did this to him,” Choi told Inquirer.net through an interpreter on Tuesday.

Choi said life for her had become “really hard” as she pressed for justice against the police officers accused of killing her husband.

“Right after the incident, I sent my daughter back to Korea. She is currently a senior high [school student] and is preparing for college,” Choi said, adding she was sad that she couldn’t be there for her as she prepared for graduation.

Tears rolling down her face, Choi declared that she still found it hard to believe that her husband was already dead.

Jee and the family maid were taken by police from their home in Pampanga last year in the guise of a drug raid.

The maid was released later but Jee was taken to the Philippine National Police headquarters in Camp Crame, Quezon City, where he was strangled inside his own vehicle.

The policemen had his body cremated and the ashes flushed down a toilet at a funeral home in Caloocan City.

The President gave the job back to the PNP later, after an alleged resurgence of the illegal drugs trade.

Kidnapping for ransom and homicide charges for the abduction and killing of Jee have been brought against Supt. Rafael Dumlao III, former chief of the PNP Anti-Illegal Drugs Group; Jerry Omlang, a National Bureau of Investigation errand boy who surrendered and confessed to participation in the crime; SPO2 Ricky Sta. Isabel; and SPO4 Roy Villegas. Gerardo Santiago, owner of Gream Funeral Homes, has been charged as an accessory to the crime.

During the hearing at the Pampanga Regional Trial Court on Tuesday, Department of Justice (DOJ) prosecutors asked the court to discharge Villegas from the case, as he had agreed to serve as state witness.

The prosecutors told the court that Villegas’ testimony was necessary to prove the participation of Dumlao in the crime. Dumlao had asked the court to allow him bail.

Villegas, the prosecutors said, is a witness to the abduction, killing and taking of Jee’s body to the funeral home in Caloocan.

They said Villegas had submitted an affidavit detailing how Jee was abducted and killed and Dumlao’s participation.

Choi said South Korean President Moon Jae-in was aware of her husband’s death and that Seoul was monitoring the progress of the case in court.

She said she met Moon at his meeting with the South Korean community after the recent Association of Southeast Asian Nations Summit in Manila.

Moon also met with the DOJ prosecutors for a discussion of the case, Choi said.

“He is monitoring the progress of the case,” she added.

Staying to the end

Choi said it had become difficult for her to live in the Philippines without her family but she had decided to stay until the conclusion of the case.

“Despite all those troubles and worries, I am here waiting for justice to be served,” she said.

“Seeing the faces of the cops and the criminals is really a painful and distressing thing for me, but thinking of my husband, I am just enduring it all. I consistently go to the hearings so that they can see that I am really determined and for the judge to make a final decision and ruling,” she said.