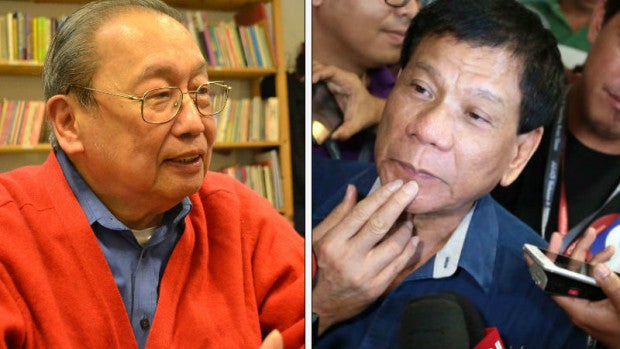 Jose Maria Sison (left), founder of the Communist Party of the Philippines, was a professor of President Rodrigo Duterte in college. (File photo from the Philippine Daily Inquirer)

National Democratic Front (NDF) chief political consultant Jose Maria Sison claimed that President Rodrigo Duterte is showing symptoms of being “mentally unfit” to handle state affairs including the peace process and suggested if he needs to be replaced.

In a statement on Friday Sison claimed that the peace negotiations were gaining ground and both the NDF and the government panels were preparing to finalize drafts on agrarian reform, coordinated unilateral ceasefires, as well as on amnesty for the release of political prisoners when Duterte called off the talks.

According to Sison in his statement entitled, “How Duterte Sabotaged the GRP-NDFP Peace Process,” the negotiating panels were looking forward to initializing the drafts, including the comprehensive agreement on social economic reforms, when Duterte started on November 18 to criticize the Communist Party of the Philippines (CPP), the New People’s Army (NPA), and the NDF.

“He also ranted against the entire peace process until November 23, when he made his Proclamation No. 360, terminating the peace negotiations,” Sison noted.

“In the course of his rants, Duterte unwittingly exposed his scarce, shallow and defective knowledge of the peace process,” Sison stressed, citing several instances including: failure to submit to the joint monitoring committee, under the Comprehensive Agreement on Respect for Human Rights and International Humanitarian Law, complaints on armed encounters; and branding the CPP-NPA-NDF as terrorists.

“Duterte spouted lies like the NDF ignored the GRP proposal for a stand down agreement prior to the adoption and implementation of the coordinated unilateral ceasefire. Showing gross ignorance of the peace process, he even referred to The Netherlands as the facilitator rather than the Royal Norwegian Government,” Sison added.

“There are symptoms that Duterte is mentally unfit to handle the complexities of the affairs of his state and the peace process between the GRP and NDFP.  GRP officials in his Cabinet and the reactionary Armed Forces should consider whether he is mentally fit for his office or needs to be replaced in accordance with their 1987 Constitution,” Sison pointed out.

He further said, “Among his lucid statements in the course of his rants are those pertaining to his voluntary admission as a fascist in the service of the United States, his overwhelming desire for killing and war and  his advice to the NDFP to negotiate with his successor in due time.” /jpv