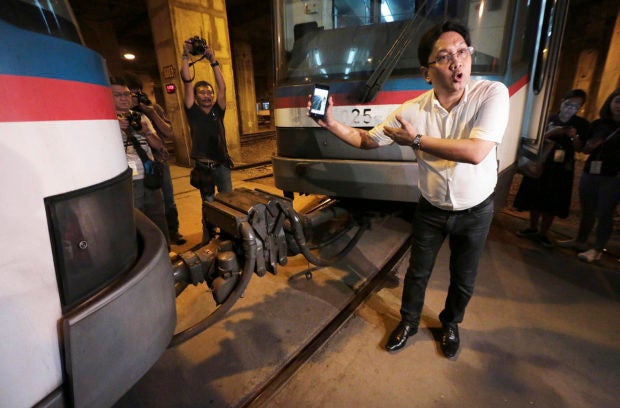 MRT 3 is the light rail line on Edsa, the busiest thoroughfare in Metro Manila.

“I hope the President understands that in light of recent events involving the MRT 3 system, a simple sense of delicadeza, which I have adhered to throughout my professional life, gives me no choice but to resign,” Chavez said in a one-page letter to President Duterte.

His resignation, which he described as “irrevocable,” came 10 days after the government took over the maintenance of MRT 3 from Busan Universal Rail Inc. (Buri), and just two days after the Department of Transportation (DOTr) sued for plunder former Cabinet members and other officials of the Aquino administration in connection with allegedly irregular MRT 3 maintenance contracts.

Chavez said it was also his “intent and hope” that his resignation would provide an opportunity for the appointment of a person “better qualified to perform the duties and responsibilities” of his office.

Transportation Secretary Arthur Tugade expressed surprise at Chavez’s resignation and denied having a hand in it.

“We have been doing plans and strategies together, up and until [Wednesday]. Even by texts as I was on sick bay,” Tugade said in a statement.

Chavez, in a press briefing that he called to announce his resignation, said that like train spare parts, managers are replaceable.

He said he agreed with Mr. Duterte that “there should be no excuses” for the glitches that continue to hound the MRT 3 system.

Chavez expressed the hope that “problems plaguing the MRT 3 system be resolved properly and with dispatch.”

Senate President Aquilino Pimentel III said Chavez, also a member of his party PDP-Laban, probably resigned out of dismay because of the case filed against him by the former maintenance provider at MRT. Pimentel was referring to Buri.

“It’s sad because he is one dedicated official,” Pimentel said, adding that Chavez apparently was “disheartened” by the case filed against him.

Other senators were equally saddened by Chavez’s sudden departure from the DOTr.

Sen. Grace Poe said she admired Chavez’s “sense of delicadeza,” although she expressed doubt “that this is the only reason that prompted him to resign.”

“It is time to evaluate the actions and the leadership of the DOTr as a whole in connection with how issues hounding the MRT has been addressed,” Poe said in a statement.

Congressmen gave mixed reactions to the resignation of Chavez.

“This is in stark contrast to his other colleagues’ penchant of continuing to blame the officials of the previous administration for the MRT woes,” Baguilat said.

Akbayan Rep. Tom Villarin described Chavez’s decision as a “fait accompli,” considering he belonged to an “administration that plays the blame game over issues of efficiency in governance.”

“The MRT 3 mess is a collective problem that goes all the way up to Malacañang. It was a campaign promise to be solved in the short run just like the campaign against illegal drugs,” he said.

About two hours before announcing his resignation, Chavez issued a statement summing up three approaches—covering tactical, operation and strategic directions—that the government and the MRT 3 management were undertaking or were planning to implement to solve the problems of MRT 3.

The first approach is the procurement, within three to six months by the DOTr of some “critical” and “urgent” rehabilitation services and spare parts, including but not limited to: the signaling system, to cover parts and services; general overhaul of 38 light rail vehicles; air-conditioning units for passengers’ riding comfort; and total rail replacement.

Chavez said the acquisition of four rehabilitation services would no longer have to wait for the procurement of the maintenance service provider, which is the second approach, and the designation of the operation and maintenance operator, which is the third approach.

In the meantime, he said a railway expert from Japan International Cooperation Agency was helping the maintenance transition team (MTT).

Rail specialists from the Asian Development Bank and the Australian government are also expected to provide technical advice to the DOTr and MRT 3 management.

With the approaching holiday season, Chavez said the maintenance and rehabilitation works should not only be sustained but also stepped up.

“So until the future of the MRT 3 is settled in a contract favorable to riders and the government, the present management cannot abdicate its duty to undertake maintenance and rehabilitation services that will ensure predictable service and passenger safety,” he said. —WITH REPORTS FROM CHRISTINE O. AVENDAÑO AND DJ YAP

Read Next
Sereno’s lawyers say accuser into fishing expedition
EDITORS' PICK
Unemployment rate up to 6% in May
House energy committee chair Arroyo bats for cheap electricity
High-risk pregnancy: Reducing your risk is in your hands
High inflation: Your P1 is now worth only 87 centavos
UK’s Boris Johnson will resign, BBC reports
Geek out at TOYCON 2022 powered by Smart Signature
MOST READ
Suspect in grisly killing of missing woman in Bulacan arrested
Kim Atienza’s daughter flaunts bikini body in response to critics of her ‘revealing photos’
Japanese artist who created ‘Yu-Gi-Oh!’ found dead in the sea
FDA probes popular Filipino noodle brand for ‘high level of ethylene oxide’
Don't miss out on the latest news and information.