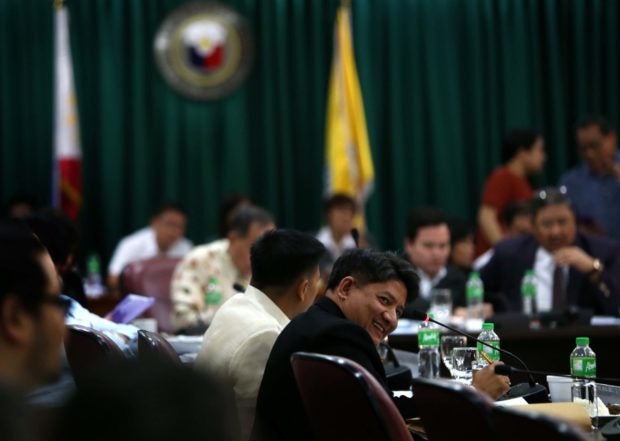 The camp of Chief Justice Maria Lourdes Sereno on Thursday accused the House justice committee and lawyer Lorenzo Gadon of turning Wednesday’s impeachment hearing into a “fishing expedition” to get evidence against the country’s chief magistrate.

Lawyer Josa Deinla, a spokesperson for Sereno, said Gadon, who filed the impeachment complaint against Sereno, failed to prove to the committee that he had personal knowledge of the accusations he had leveled against the Chief Justice.

“Mr. Gadon’s resorting to fishing expedition, with the aid of some members of the committee, served to highlight one crucial fact: There is no solid evidence and sufficient grounds for impeachment against the Chief Justice,” Deinla said in a statement.

Gadon, however, insisted that all the allegations he had thrown at Sereno were supported by evidence.

He also insisted that he had satisfactorily answered the lawmakers’ questions.

“What was contended [on Wednesday] was the one document [that] was not attached to the records, the memorandum of [Supreme Court Associate Justice Teresita Leonardo-de Castro],” he said.

“As I have explained during the hearing, it is one of the documents granted by the [full] Supreme Court to be released to me. [But] when I asked for a copy from the clerk of the [Supreme Court], I was told that it was not available at that time and they [couldn’t] find it,” he added.

“The VACC (Volunteers Against Crime and Corruption), however, was able to secure a certified copy of the document, [which they] attached to their complaint. That is why Congressman (Eugene) de Vera said there [was] no need to ask for it, since there [was] a certified copy in the possession of the justice committee,” he said.

In his complaint, Gadon referred to an internal memorandum issued by De Castro in July questioning Sereno’s orders that bypassed the rest of the court.

Among the orders questioned by De Castro was the appointment of lawyer Brenda Mendoza to the Philippine Judicial Academy without the approval of the full court,

a violation of the court’s collegial rule.

Lawmakers on the justice committee grilled him on how he learned that Sereno falsified a temporary restraining order drafted by De Castro and whether he had an authentic copy of a memorandum issued by De Castro questioning some of Sereno’s actions.

At one point, Gadon said his source was Manila Times reporter Jomar Canlas, but De Castro issued a statement denying she released to Canlas “any information, report or document regarding the work of the court.”

Gadon was also questioned about his familiarity with Sereno’s financial disclosure in connection with his charge that she did not declare P30 million in lawyer’s fees that she had earned as government counsel in the Piatco case before she joined the judiciary.

He admitted that he did not know whether Sereno declared the fees, as he had not seen her financial papers before she became a member of the judiciary.

But on Thursday, Gadon said: “Personal knowledge can be debated and refuted and may need further proof. A public document says what it is … it speaks for itself … it is thus more reliable and credible … My complaint [is] based on documents certified by the [Supreme Court] no less.”

The House justice committee will resume the hearing on Sereno’s impeachment on Monday.

Lawmakers on the committee agreed on Wednesday to invite De Castro to the hearing.

Gadon said he expected the committee to invite Supreme Court Associate Justice Francis Jardeleza to shed light on his charge that Sereno manipulated the Judicial and Bar Council to block Jardeleza’s appointment to the high court.