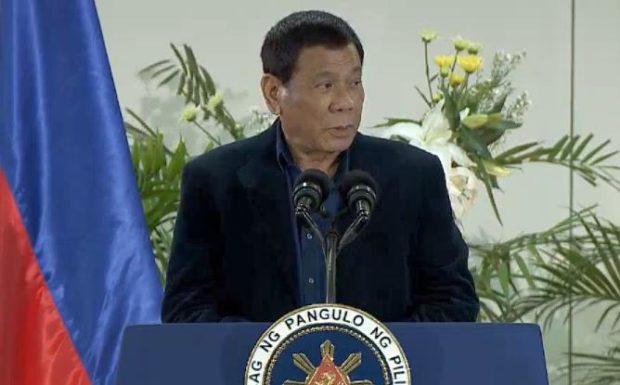 Two days after he said he would slap Commission on Human Rights (CHR) Chair Jose Luis “Chito” Gascon, President Rodrigo Duterte said he would “kick” the human rights chief, a known critic of his war on drugs.

In his speech during a congressman’s birthday celebration in Malacañang on Wednesday night, Duterte again defended his war on drugs, which has gained international condemnation for alleged human-rights violations.

“Yang drugs na ‘yan, if it fails or if it succeeds now, I will be there to finish it off. At least on the third, fourth year, mawala ‘yan,” he said.

“Even if I have to kill, I will kill. Ayan sa mga ganyan… Hindi naman ‘yang kill na literally maghanap ka lang nang patayin (Just like to those… It is not literally kill like looking for someone to kill),” he added.

The President said the illegal drug industry in the country would be destroyed before he steps down from office.

“But I will order you, before I leave the government, the shabu industry must be destroyed,” he said.

He reiterated his war on drugs would be unforgiving, as he threatened to kick Gascon, one of his staunchest critics on his vicious campaign against illegal drugs.

(We will have no mercy in that. Human rights is nothing, Gascon is nothing, I would even kick him.)

Duterte had also earlier described Gascon as a “pedophile.” /jpv