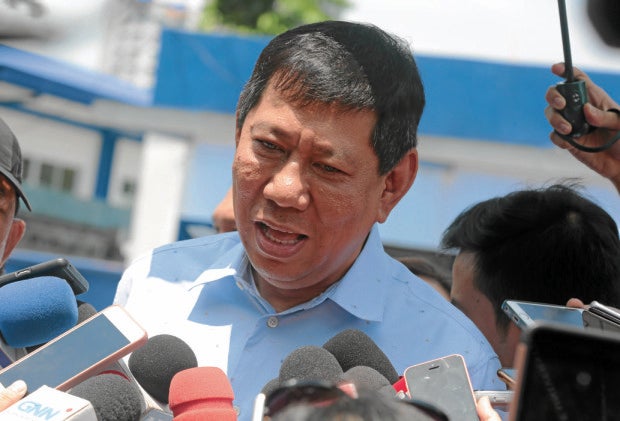 A small-scale miner has filed a criminal complaint against Caloocan City Rep. Edgar Erice and five executives of a mining firm in Tubay, Agusan del Norte province, for allegedly falsifying documents regarding their mining operations.

In a nine-page affidavit, Rodney Basiana claimed that Erice, a Liberal Party stalwart, and officials of SR Metals Inc. (SRMI) altered the date on the documents they used to extract minerals from an 81-hectare mining area in Tubay town.

President Rodrigo Duterte had previously identified SRMI as one of the mining companies responsible for destroying the environment in Agusan provinces.

However, a mining audit ordered by former Environment Secretary Gina Lopez absolved the company from allegations it violated mining and environmental laws.

“(T)he respondents… conspiring, confederating and helping one another, committed willful and deliberate assertions of falsehoods by making untruthful statements in a narration of facts,” Basiana said in a complaint dated Sept. 8, a copy of which was secured by the media from the Department of Justice on Monday.

In his complaint, Basiana claimed that he and his father were the rightful owners of the permits covering the mining area in Barangay La Fraternidad, which they assigned to Basiana Mining Exploration Corp. (BMEC) on June 30, 1997.

Three years later, he said they transferred the rights for the application of a mineral production sharing agreement (MPSA) for the said mining site to Manila Mining Corp. (MMC).

In October 2005, Basiana said he agreed to execute a supplemental agreement with MMC allowing SRMI, then represented by Erice, to “undertake technical and geological test, and exploratory operations” in the mining site.

He said SRMI was supposed to pay BMEC 5 percent of the gross proceeds of the extracted minerals.

However, Erice filed an application for an MPSA for the same mining site with the Mines and Geosciences Bureau in Surigao City on July 7, 2006, according to Basiana.

He said Erice and other SRMI officials used spurious documents to make it appear that they originally filed the MPSA application in 1997, despite the fact that the company was only registered with the Securities and Exchange Commission on May 10, 2005.

“Clearly, the MPSA application filed by SRMI… is highly irregular,” he said.