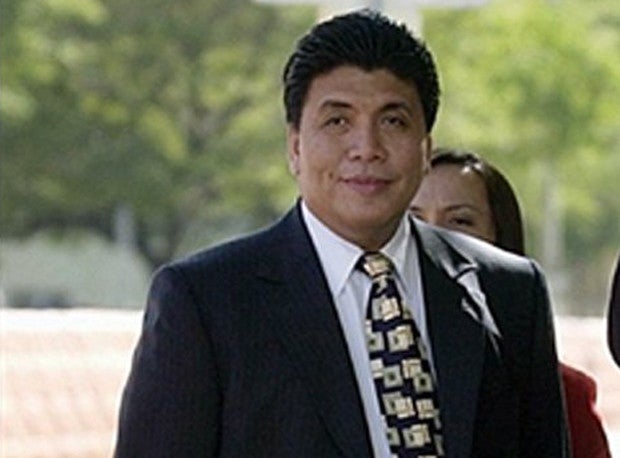 The antigraft court Sandiganbayan will proceed with the trial of Surigao del Sur Rep. Prospero Pichay Jr. over the buyout by the Local Water Utilities Administration (LWUA) of an insolvent thrift bank, but let off the hook another congressman, Valenzuela Rep. Weslie Gatchalian, one of Pichay’s coaccused.

Pichay and Gatchalian had been charged with conspiring to funnel P780 million of LWUA funds to buy a 60 percent majority share in Express Savings Bank Inc. (ESBI), based in Laguna and owned by Forum Pacific Inc. (FPI), and the Gatchalian family’s Wellex Group Inc. (WGI).

But in a 30-page resolution on Nov. 17, the court’s Fourth Division set aside a resolution on Oct. 18, 2016, finding probable cause to try not only Pichay, but also members of the Gatchalian family — William, Dee Hua and Kenneth — and other WGI and FPI officials.

The court said the assignment of shares by ESBI stockholders to LWUA “does not lead the reasonable mind to conclude that there is conspiracy” to profit from the transaction at the government’s expense.

Reversing its Oct. 18, 2016, resolution, the Sandiganbayan division said the conspiracy angle was “only bare and unfounded allegation by the Ombudsman.”

It said the beneficiary in the transaction was ESBI and not its stockholders who had sold shares to LWUA, which was then chaired by Pichay.

Members of ESBI’s board of directors were not held liable for the infusion of additional capital into the insolvent bank because it was not the board’s function to approve it.

The new Sandiganbayan resolution leaves Pichay and Wilfredo Feleo Jr., former LWUA deputy acting administrator, as the accused in three counts of violation of the AntiGraft and Corrupt Practices Act and the Manual of Regulation for Banks.

One of the previously accused, Sen. Sherwin Gatchalian, had been cleared in the Oct. 18, 2016, resolution.

In a statement, the senator said the case was proof “that some people will do anything to damage your reputation for political purposes.”

“Hopefully, the triumph of truth over baseless allegations unfairly thrown against me and my family will redeem our reputations,” said Sherwin.

His brother, Rep. Gatchalian, said he felt vindicated by “this favorable development.”

“I can now fully devote my time and effort to my legislative work,” said the congressman.

Pichay did not respond to the Inquirer’s request for comment.