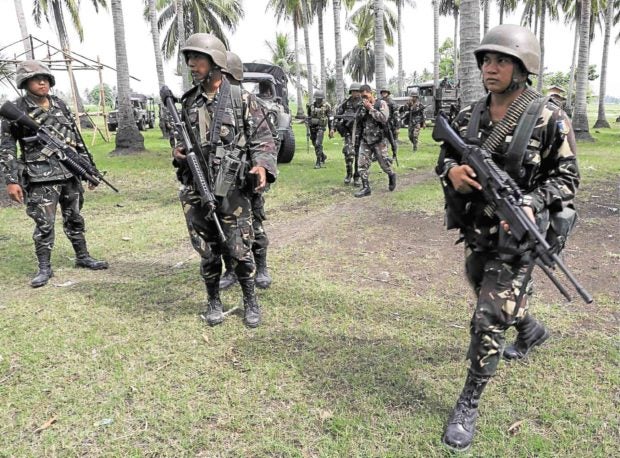 Several Caucasian-looking gunmen, among at least 10 foreigners and their pro-Islamic State (IS) allies from the Bangsamoro Islamic Freedom Fighters (BIFF) were being pursued by government troops on the borders of two North Cotabato towns, the military said on Saturday.

Col. Gerry Besana, chief of civil-military operations of the Army’s 6th Infantry Division based in Maguindanao province, said this was not the first time that foreigners were sighted in the company of BIFF militants in the province.

It was in Maguindanao where Indonesian bomb expert Zulkifli bin Hir, alias Marwan, was killed in a bloody police raid that also left 44 Special Action Force commandos dead in January 2015.

Besana said they were trying to determine the nationalities of the foreigners. The black-clad gunmen were seen fleeing with BIFF fighters led by Commander Abu Torayfe following several skirmishes with soldiers on the borders of Aleosan and Carmen towns.

“They escaped from the SMPS box in Maguindanao due to massive military operations there,” Besana said.

Air Force MG-520 armed scout helicopters have been strafing and bombarding Torayfe’s group with rockets in the village of Tonganon, the military said.

Besana said village officials and civilians alerted the military to the presence of heavily armed men in their areas.

Separate airstrikes were also carried out on the borders of Datu Unsay and Shariff Aguak against another BIFF faction led by Esmael Abubakar, alias Commander Bungos, he said.

Civilian witnesses said at least seven BIFF fighters were killed during the operations in Shariff Aguak. Soldiers were unable to recover a single body, though.

About 5,000 people have been displaced by the fighting in North Cotabato and Maguindanao, according to government disaster relief officials, who are attending to the immediate needs of the affected families.

He said the preemptive and surgical operations were meant to prevent IS terrorists from massing and then launching a Marawi City-like siege in any part of Mindanao.

On May 23, IS-inspired militants attacked Marawi City, forcing some 260,000 residents to flee the country’s only Islamic city.

The five-month battle that followed left most of Marawi, Lanao del Sur’s center of economy, culture and heritage, in ruins. The military counteroffensive killed 920 terrorists, including its leaders, Omarkhayam and Abdullah Maute and Abu Sayyaf chief Isnilon Hapilon, IS “emir” in Southeast Asia.

The military said scores of foreign fighters from such countries as Indonesia, Malaysia, Yemen and Chechnya were also killed in the battle. —Edwin Fernandez