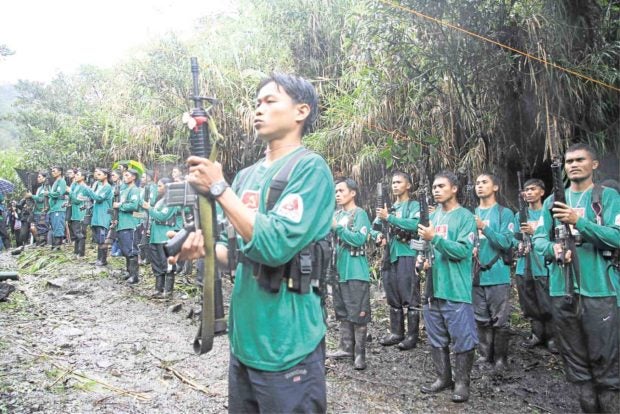 Saying he was fed up with their recent actions, including the alleged killing of an infant, President Duterte announced on Saturday that he would classify the New People’s Army (NPA) as a terrorist group.

The President also warned of a possible crackdown on left-wing groups such as Bayan that he said were conspiring with the communist rebels.

Mr. Duterte said he planned to order a fresh offensive against the NPA after soldiers have had enough rest, apparently referring to government troops who were deployed to fight pro-Islamic State militants in Marawi City over the past five months.

“Before, we recognized them as legitimate rebels. But with their continued depredations, killing innocent people even an infant 4 months old, I’ll be issuing a proclamation. I will remove them from the category of a legal entity, or at least a semimovement which would merit our attention, placing the—same as America—terrorists,” Mr. Duterte told reporters in Davao City.

He said he was no longer inclined to resume peace talks with the rebels, who had called him a fascist, a killer and corrupt.

If the rebels believed he was all these, why would they bother talking to him, Mr. Duterte asked.

The President’s statements further dimmed any prospect for a resumption of the stalled talks between the government and the communist umbrella, the National Democratic Front of the Philippines, which represents the Communist Party of the Philippines (CPP) and the NPA, its armed wing.

Rebellion won’t be recognized, as it was just a “slight” offense which was bailable, he said. The NPA members would instead be slapped with charges of terrorism, murder, arson and the like, Mr. Duterte said.

“I would consider them criminals already,” he said.

He also said groups like Bayan were in a conspiracy with the ongoing communist rebellion.

“We will study and maybe we will have a crackdown here somewhere,” he said.

“I am sick of their shenanigans,” he said.

He also blasted groups claiming to speak for the people and legitimate, and yet shaking down private businesses.

According to the President, these groups make it hard for people to earn a living and were the reasons for the rise in food prices.

Mr. Duterte halted talks with the rebels in July following a series of NPA attacks against government forces. He said he would not resume the talks unless the rebels stop their extortion activities.

The fifth round of talks brokered by Norway was suspended on May 27 after the government panel withdrew from the negotiating table in response to the CPP’s order to guerrillas to intensify attacks against security forces.

In an interview with the government-run PTV network in September, the President said the resumption of the talks would just be a waste of money.