Sicilian town had long, bloody past before ‘Godfather’ fame 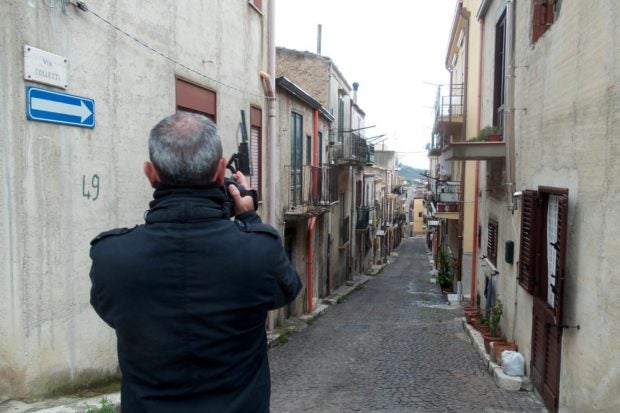 A view of the street where the home of the Riina family is, in the Sicilian town of Corleone, southern Italy, Friday, Nov. 17, 2017. Mafia boss Salvatore ‘Toto’ Riina died early Friday in a hospital while serving 26 life sentences as the mastermind of a bloody strategy to assassinate rivals as well as Italian prosecutors and law enforcement trying to bring down Cosa Nostra. (Michele Naccari/ANSA via AP)

CORLEONE, Sicily — Corleone is a Sicilian medieval hill town whose bloody past began generations before “The Godfather” novels and films borrowed its name for a fictional Mafia don.

It is the birthplace of several convicted real-life Mafia bosses, among them Salvatore “Toto” Riina, the reputed “boss of bosses,” who died Friday at 87 in a prison ward of a northern Italian hospital.

Corleone has witnessed recent signs of rebellion against an entrenched Mafia culture where religious pageants pay tribute to reigning mob bosses, with processions stopping outside the dons’ homes.

A town square is named after two top anti-Mafia magistrates slain by Cosa Nostra bombings in 1992.  Inaugurated in 2000, an anti-Mafia museum, together with the International Center for Anti-Mafia documentation, also educates visitors about the fallen heroes in the war against the Sicilian crime syndicate.

When native son Riina was arrested in 1993 in Palermo, schoolchildren ran into Corleone’s streets in joy, rallying behind a banner that read “Finally” — their jubilation a reflection of a new and burgeoning resistance to the Mafia by a younger generation of Sicilians.

But the Mafia’s grip on the town isn’t easily removed.

Corleone’s City Hall is currently run by authorities sent from Rome’s Interior Ministry after the municipal government was dissolved by government decree due to Mafia infiltration. Local public contracts have long been a traditional source of income for Cosa Nostra.

Whether the end of the Riina era will spell change for Corleone was unclear for its citizenry.

Whoever his successor as the top Mafia boss may be, “I know for sure there is still a (Mafia) mentality here that we need to dismantle,” said Mario Alfieri a Corleone pharmacist.

An employee of the anti-Mafia museum, Lorena Pecorella, noted that Riina died in prison, “where it was right for him to die.” She said the town’s negative heritage as a synonym for the Mafia will be difficult to eradicate.

“We know the negative heritage he is leaving us young people,” she said.

Old-timers in the town can recall when in the 1950s and 1960s, parents warned children to come home straight from school because Mafia rivalry was exploding into a killing nearly every day. Riina’s predecessor as a top boss, Luciano Liggio, emerged from a string of bloody murders, including one series triggered by the killing of a Mafia don who was a prominent town physician.