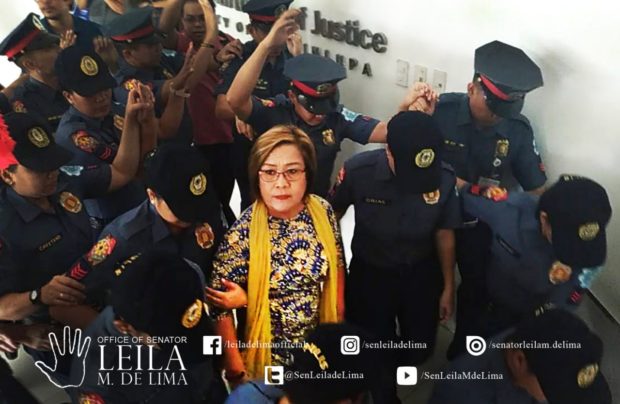 From the office of Sen. Leila de Lima

Sen. Leila de Lima has sought the inhibition of Judge Juanita Guerrero of the Muntinlupa Regional Trial Court (RTC) from the illegal drug trading complaint filed against her, citing the judge’s “obvious” partiality and questionable independence to hear her case.

In a 23-page motion, De Lima pointed out Guerrero’s alleged display of undue haste to ensure her detention based on a complaint built upon false testimonies of drug convicts during the House of Representatives’ inquiry last year into the alleged drug proliferation at the New Bilibid Prison.

“The glaringly clear, single-minded overeagerness to detain [me] based on an invalid information that is irredeemably and irreparably tainted and made defective by, among others, the rampant and blatant violation of [my] rights, is quite evident,” stated De Lima.

She said that an impartial judge must have acted on the red flags indicating serious irregularities that attended the preliminary investigation of her case and would have protected and respected her constitutional rights.

“In this case, Judge Guerrero did no more than pay superficial lip service to the constitutional guarantees set forth, when she brushed aside the inconsistencies in the testimonies relied on the prosecution and the issues [I] timely raised,” De Lima said.

She maintained that the presiding judge of the Muntinlupa RTC Branch 204 should stop conducting further proceedings on her cases as she had repeatedly violated her constitutional rights.

Recounting events that transpired so far, De Lima noted Guerrero’s illegal issuance of a warrant of arrest against her in February, the judge’s inaction of her motion to quash and the scheduling of her arraignment before deciding on the pending motion and the motion for reconsideration (MR) filed before the Supreme Court.

In the same motion, she also urged the lower court to defer her arraignment pending the resolution of the MR in the high tribunal.

De Lima’s scheduled arraignment on Thursday was reset to Jan. 24, 2018.

“It is incumbent upon this court to hold in abeyance the scheduled arraignment. Otherwise, such an act would be tantamount to this court preempting the Supreme Court and arrogating unto herself the authority to have a final say on the jurisprudential effect of the Supreme Court’s decision,” she said.

She added that proceeding with the arraignment while majority of the members of the high tribunal could not even agree on the nature and cause of accusation against her would be a gross violation of her constitutional right to be accorded due process of law.