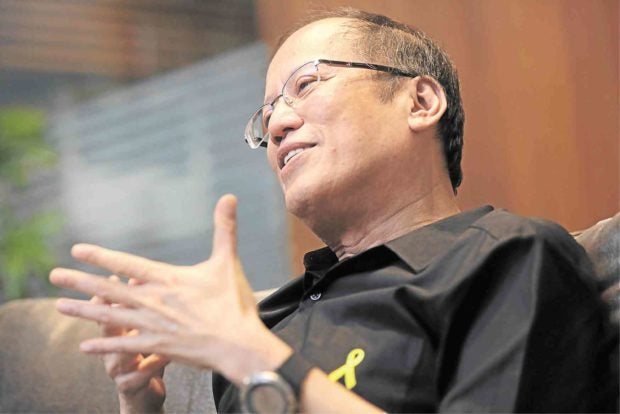 In just an hour after posting bail last Friday, former President Benigno Aquino III was told that the Sandiganbayan had found probable cause on the Mamasapano case against him and that he would have to face trial, but that a warrant of arrest would no longer be issued since he had already posted bail.

The antigraft, however, issued a hold departure order (HDO) on Aquino.

Aquino went to the Sandiganbayan hours after his case was raffled off and landed with the Third Division, chaired by Presiding Justice Amparo Cabotaje-Tang, whom he appointed to the antigraft court in 2013.

He posted his P40,000 bail in cash for the usurpation of authority and graft charges stemming from the botched police operation in Mamasapano, Maguindanao in 2015 that led to the deaths of 44 police special commandos and became one of the lowest, if not the lowest, point of his presidency.

Aquino was accompanied by his two lawyers and surrounded by political allies, some of whom wore yellow— the Aquino family’s political color—inside the cramped but air-conditioned room of the Sandiganbayan Third Division, which will handle his case.

Aquino pinned his trademark yellow ribbon on the left side of his white long-sleeved barong Tagalog.

His sisters, brother-in-law, nephew and cousin watched a few meters away from where the group huddled with Third Division clerk of court, lawyer Dennis Pulma.

It was Pulma who briefed the former President, said Abigail Valte, Aquino’s spokesperson.

“Atty. Pulma informed former President Aquino and his lawyers that the court had found probable cause and issued an HDO and (arrest) warrant. But the warrant would not be served since he already posted bail,” Valte told the Inquirer.

Posting bail ahead of the court found probable cause and issued an arrest warrant, and submitting his own photos in lieu of a police mugshot— although not unheard of —turned out to be a masterstroke by Aquino’s legal team.

It avoided the circus that usually ensued when the police serve an arrest warrant to a political figure—a scene all too common in the Philippines.

Aquino, as well as Tang in a separate interview, both stressed that posting bail was a constitutional right since the case is a bailable offense.

Aquino will be arraigned, tentatively on Jan. 12 next year.

While an HDO was issued on him, those who know the former President said it would be the least of all his concerns. Aquino is known not to be very fond of traveling.

His only foreign trip post-presidency was in Singapore where he was invited to speak at a forum. Aquino’s travels mostly consist of regular visits to Tarlac, his family’s hometown.