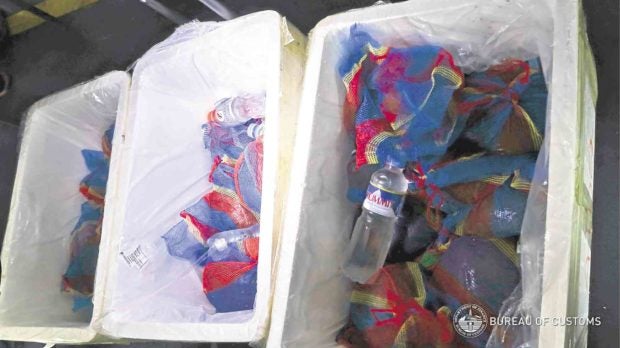 Over a hundred soft-shell turtles and eels were discovered by authorities as they were about to be loaded on a China Airlines flight on Friday.—BOC photos

The Bureau of Customs (BOC) foiled an attempt to smuggle endangered wildlife out of the country after it intercepted seven parcels containing turtles and live eels at Ninoy Aquino International Airport (Naia) on Friday.

The packages, which were bound for Taiwan, were set to be loaded on a China Airlines flight when found to be containing 123 Chinese soft-shell turtles and live eels of still undetermined number.

“It was through profiling and manual examination that the BOC’s export division was able to intercept the shipment of 3H Enterprises Ltd.,” BOC commissioner Isidro Lapena said in a statement.

The turtles, reportedly from Pampanga province, did not have the required export permits from the Department of Environment and Natural Resources (DENR).

“Aside from being endemic to China and Taiwan, these turtles can also be farmed. They are usually harvested for food and folk tonic remedies,” Anquilan said.

On Oct. 26, a package supposedly containing pastries and bound for Sweden was found containing a pit viper, four Philippine cobras and 10 sailfin lizards.

The animals were turned over to the DENR. —Julie M. Aurelio