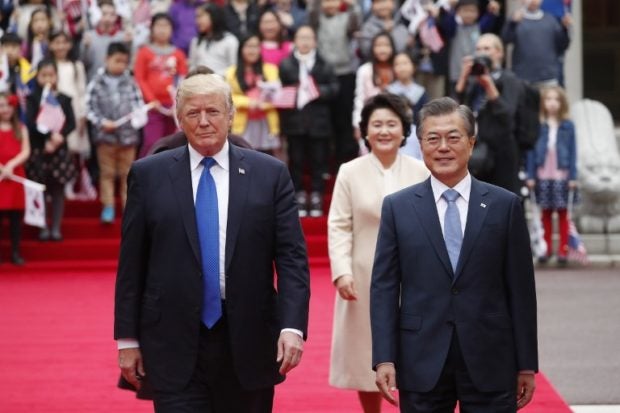 US President Donald Trump touched down in South Korea at 12:18 p.m. local time on Tuesday, beginning his two-day state visit.

Trump was welcomed by South Korean Minister of Foreign Affairs Kang Kyung-wha and Cho Yoon-je, the recently appointed ambassador to the US at the Osan Air Base in Gyeonggi Province.

Trump is on the second leg of his tour of Asian nations, and arrived here from Japan after a three-day visit to the country.

Trump’s state visit, the first by a US leader since 1992, comes at a time of heightened tension on the Korean Peninsula, and when a number of difficult issues remain outstanding in Seoul-Washington relations.

North Korea has engaged the US in an escalating war of words, and has taken its defiance of the international community to a new level, testing a hydrogen bomb, and firing a series of ballistic missiles.

South Korea and the US are also in the process of modifying the Korea-US Free Trade Agreement.

Trump, however, showed characteristic confidence ahead of his arrival.

“Getting ready to leave for South Korea and meetings with President Moon, a fine gentleman. We will figure it all out!” Trump tweeted in Japan.

Seoul’s plans to boost its own military capabilities is also in question. As part of the plans, the US has agreed to limit payload restrictions on Seoul’s ballistic missiles and to aid in developing advanced weapons systems.

Trump’s tweet concerning his visit to Japan has set off speculation that the US leader could push for similar results in his talks with Moon.

“My visit to Japan and friendship with PM Abe will yield many benefits, for our great Country. Massive military &amp; energy orders happening+++!” Trump tweeted.

As for Trump’s South Korean itinerary, the US leader’s first stop will be Camp Humphreys, in Pyeongtaek, Gyeonggi Province, where he will meet with South Korean and US troops.

From there, Trump will travel to Seoul to attend the official welcoming ceremony at the presidential office of Cheong Wa Dae.

The ceremony will be followed by summit meetings — one-on-one and expanded — and a joint press conference later in the afternoon.

In the evening, Trump will attend the gala dinner hosted by Moon to wrap up the first day of the visit.

The event will be attended by key officials from the two sides including National Assembly Speaker Rep. Chung Se-kyun, Prime Minister Lee Nak-yeon and 20 government and military officials. Along with political and government officials, a number of members of the corporate community, culture figures and Korean and US citizens who have contributed to bilateral relations will also be invited.

US officials attending the event will include chief of staff John Kelly, Secretary of State Rex Tillerson and national security adviser H.R. McMaster.

On the following day, Trump will address the National Assembly, and pay respects at the National Cemetery in Seoul before flying to China.