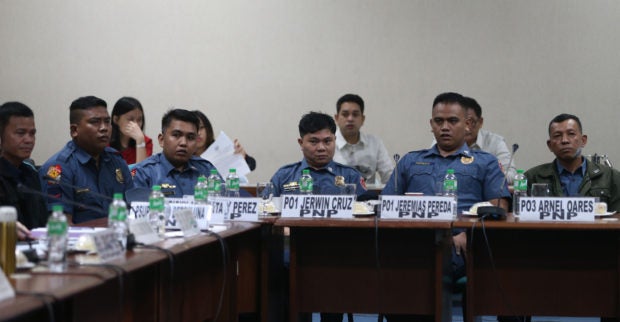 Despite strong objection from the Public Attorney’s Office (PAO), the Department of Justice (DOJ) panel hearing the double murder case of Carl Angelo Arnaiz and Reynaldo “Kulot” de Guzman granted the requests of the suspects to present additional witness statements to strengthen their defense.

In the resumption of the hearing on Tuesday, the DOJ panel led by Senior Assistant State Prosecutor Ma. Emilia Victorio granted respondents Police Officers 1 (PO1) Ricky Arquilita and Jeffrey Perez until Friday, Nov. 10, to either submit the witnesses’ original sworn affidavit or bring them personally before the panel.

“We give you only until Friday to either submit the original of this affidavit or if you cannot submit the original then you have to bring on Friday Solomon Rosca and Madelene Soliman to this office to reaffirm their sinumpaang salaysay before the panel,” Victorio said during the hearing.

“Without any extension, that’s only on Friday. That is just only to give you the right to fully ventilate your defense,” she added.

Arquilita and Perez’s legal counsel, Dodjie Encinas, earlier appealed to the panel to grant them ample time to find the witnesses, Rosca and Soliman, as their camp only obtained a photocopy of the latter’s affidavit on Saturday.

In an interview with reporters after the hearing, Encinas said the witnesses’ testimony would strengthen his clients’ claim that there was, indeed, a shootout between the police and Arnaiz that resulted in the boy’s death.

(Instead of yielding, the man being chased fired shots and a shootout ensued. Because of that, the witnesses sought cover in an alley. After a few minutes, they went out and saw a police mobile and a man was lying down the street.)

However, the lawyer admitted that they have yet to personally meet the witnesses and verify the contents of their affidavit.

(I pray that we find these people and persuade them to appear before the panel, at least let them explain what they saw that day.)

PAO chief Persida Acosta strongly objected to the extension given to the respondents, saying they have been given ample time to present the witnesses and answer the accusations against them.

“We can sense an unending preliminary investigation on this case. There’s already a commitment last time for both parties of the panel this will be the last for the countermanifestation. And here comes, they are producing witnesses which have been presented at the filing of the counter affidavit,” Acosta told reporters.

She also explained that such move would delay the proceedings and would give more “injustice” to the victims’ families.

“Witnesses may come during the entire proceedings, that’s allowed, but in the preliminary investigation, it should not last long. Because you are just inviting bogus witnesses, planted witnesses, who just want to ride on on the case. So it would entail and injustice to the victims,” she added. /cbb