No work in gov’t offices within PICC complex on Nov. 8 to 15 – Duterte 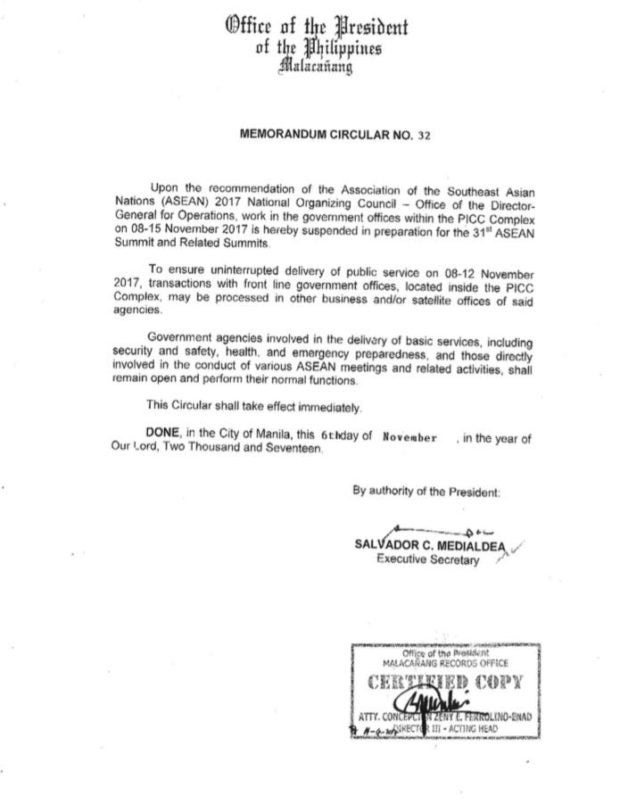 President Rodrigo Duterte has suspended work in government offices within the Philippine International Convention Center (PICC) complex in Pasay City from November 8 to 15 due to the Association of Southeast Asian Nations (Asean) Summit.

Duterte signed on November 6 Memorandum Circular 32, deferring work in government agencies located within the PICC complex for a week starting on Wednesday.

The President, however, said government agencies directly involved in basic services such as security and safety, health and emergency preparedness as well as those directly involved in the conduct of various Asean meetings and related activities would continue their operations.

“To ensure uninterrupted delivery of public service on 08-12 November 2017, transactions with front line government offices, located inside the PICC Complex, may be processed in other business and/or satellite offices of said agencies,” the order stated.

Earlier, Duterte declared November 13 to 15 as Special Non-Working Days in Metro Manila, Pampanga, and Bulacan, as the country hosts the 31st Asean Summit and Related Meetings.

Metro Manila mayors had also suspended classes on all levels in the National Capital Region (NCR) on November 16 and 17.

While the Asean conferences would end on November 14, Quezon City Mayor Herbert Bautista said the Metro Manila Council decided to suspend classes in all levels since thousands of delegates were expected to tour Metro Manila after the summit.      /kga