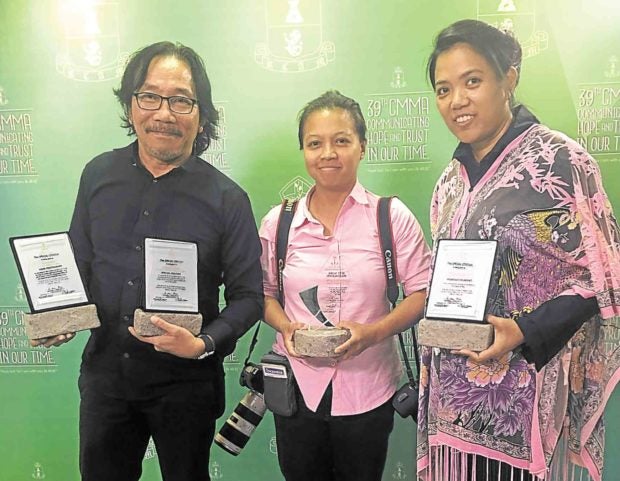 Photographer Lyn Rillon (center) leads the Inquirer awardees in the 39th CMMA. With Rillon are correspondent Juan Escandor Jr. and Eline Santos, cited for their feature on a Church-supported rehabilitation center in Masbate province. —JULIET LABOG-JAVELLANA

Other stories and photographs that captured the brutality of the government’s war on drugs, as well as offered alternatives for rehabilitation and redemption for the drug suspects won citations from the body, which carried the theme, “Communicating hope and trust in our time,” for this year’s awards.

Photographer Raffy Lerma’s Pieta-like photo of Jennelyn Olaires cradling her slain partner, Michael Siaron, a victim of the antidrug war, received a Special Citation in the News Photograph category from the CMMA. The photo, titled “Lamentation,” has also won awards here and abroad.

“For advocating the value of respect and love for life through the image of a woman’s agony and cry for justice—along with the nation’s—in the face of drug-related killings that have claimed the lives of mostly poor drug suspects,” the citation read.

Inquirer correspondent Juan Escandor Jr. and researcher Eline Santos also received a Special Citation for Special Feature for writing about Fazenda da Esperança (Farm of Hope) or Fazenda, a sprawling Catholic Church-run farm in Masbate where people addicted to drugs, alcohol, gambling and sex, among others, are rehabilitated amid trees and flowering plants.

“For presenting that there is always hope for drug dependents and those addicted to other vices to change, with the help and full support of those who care for their welfare,” the citation read.

The CMMA also gave a Special Citation in the Investigative Report category to reporter Maricar Cinco for the “comprehensive reportage on the efforts to save Laguna de Bay.” 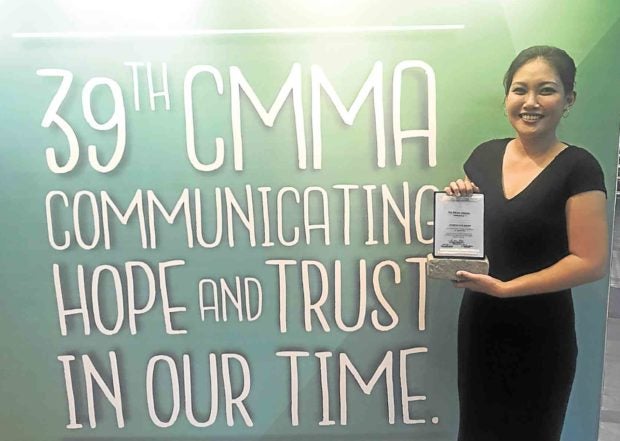 Senior reporter Ador Vincent Mayol of Cebu Daily News took home awards for Best in News Coverage for his series on drug rehabilitation, titled “There is hope for drug addicts”; Best in Feature for his story on cancer patients, titled “Hope amid the pain,” and Special Citation in the Best Special Feature category for his story, “The light at the end of the tunnel for Lia.”

Inquirer correspondent Madonna Virola won the Pope John Paul II Award, which is bestowed to a group or a person who utilizes media in creative ways to promote the faith and uphold Christian values.

John Paul II was known as “one of the world’s greatest communicators.”

Communication, he said, is not just an art or a skill, but an “impulse of the human person.” True communication entails “conversion of the heart,” otherwise it’s reduced to techniques. It also doesn’t hide behind pretensions, or else, it turns into “manipulation,” he added.

Since communication “is personal,” everyone is called to be communicators, Tagle, honorary chair of CMMA, told the finalists in brief remarks at Star Theater in Pasay City.