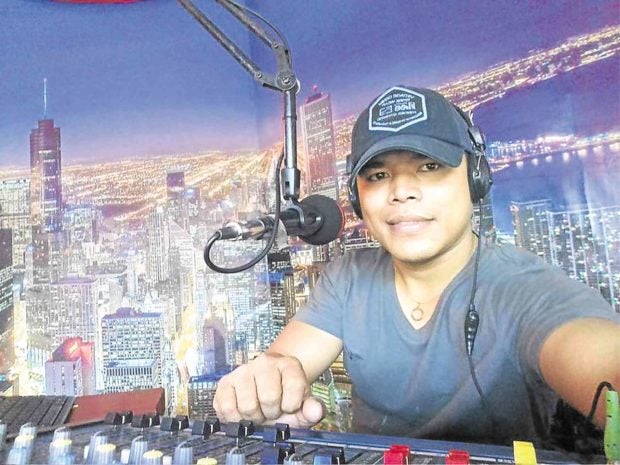 SAN FRANCISCO, Agusan del Sur — Months before unidentified gunmen shot and killed him on Tuesday, broadcaster Christopher Lozada had decided to leave Bislig City in Surigao del Sur province because of threats to his life.

Rona Omo, station manager of Radyo Natin Bislig, said Lozada went to Metro Manila “to cool things down” but returned to Bislig to continue what colleagues called his anticorruption crusade.

On his Facebook page, Lozada posted screenshots of text messages he received after his return. One of these messages told him he would die 95 days from Oct. 12.

But death came earlier for the hard-hitting broadcaster.

At 9 p.m. on Tuesday, or only 12 days after the threat was made, Lozada, 29, was gunned down just as he arrived home in Barangay Coleto in Bislig from Butuan City.

He and girlfriend Honey Faith Indog were alighting from a Toyota Vios car when armed men aboard a van shot them, Chief Insp. Joseph Gementiza, Bislig deputy police chief said.

Lozada died instantly while Indog was wounded and taken to a local hospital.

Lozada hosted the public affairs program, “Kuskos-Batikos,” aired through Prime Broadcasting Network, where he dished out scathing commentaries against a local politician allegedly involved in corruption.

Gementiza said Lozada went to their police station twice this month to report the death threats he received through text messages.

Lozada had been at odds with Bislig City Mayor Librado Navarro and even participated in the filing of a graft case against the official.

Navarro admitted he and Lozada were at odds, but denied any hand in the killing.

“I am open to any investigation and I will face in court anybody who’s interested to file [cases against me],” he said.

Lozada was the seventh Surigao del Sur broadcaster killed since 2009.

“If his killing is proven to be related to his work as a journalist, Lozada would be the fifth media practitioner murdered under the administration of President Duterte and the 178th since 1986,” the National Union of Journalists of the Philippines said in a statement. —With reports from Jigger Jerusalem