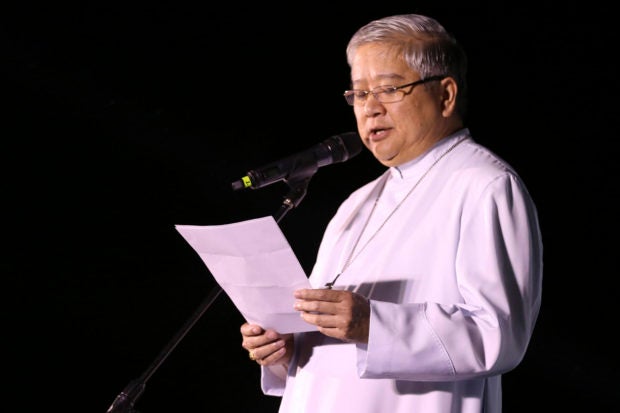 The Catholic bishops are appealing to Filipino people to go back to Edsa on November 5 for a one-kilometer procession from the Edsa Shrine to the People Power Monument to kick off the “start the healing” campaign in our country, which is plagued by the recent spate of killings.

“I am inviting you and the communities with you to participate in the second phase of this period of praying for the victims of extrajudicial killings. We will start on November 5 until December 8, the solemnity of the Immaculate Conception,” Catholic Bishops Conference of the Philippines (CBCP) President Archbishop Socrates Villegas said in a statement on Thursday.

Villegas said there will be a mass at the Edsa Shrine on November 5, at 3 p.m.

“This 33 day period will prepare us to make our act of consecration to the Immaculate Mother. We will call this 33-day period as the time to ‘Start the Healing,'” he said.

“Within this 33-day period, we are requested to pray the rosary and receive Holy Communion, if possible every day, for the healing of our bleeding nation and for the peace of the souls of all those killed,” Villegas added.

The CBCP started the “Stop the Killings” campaign since September 23 until November 1 this year, through daily rosary, church bell tolling and candle lighting every 8 p.m.

Villegas said the CBCP will set aside November 5 as the “Lord Heal our Land Sunday.”

After the mass on November 5, he said the image of Our Lady of Fatima that was brought by devotees to Edsa in the 1986 People Power revolt will be brought in a candlelight procession to the People Power monument a kilometer away from the Edsa Shrine.

“We believe that our national healing, which only the Lord can grant, will come to us through the hands of His mother,” he added.

The Lingayen-Dagupan Archbishop urged Filipinos to join the event and for priests nationwide to hold masses in provinces for those who cannot go to Edsa.

“We are inviting the men and women in consecrated life, the youth and their teachers, the poor and the rich, the healthy and the persons with disability, the laborers and the entrepreneurs, the police and the military, the majority and minority political parties, in other words EVERYBODY, to join this observance of the ‘Lord Heal our Land Sunday,’” Villegas said.

“In asking the Lord to heal our land, we will pray to Him together because we are God’s children wherever we may be,” he added. /jpv