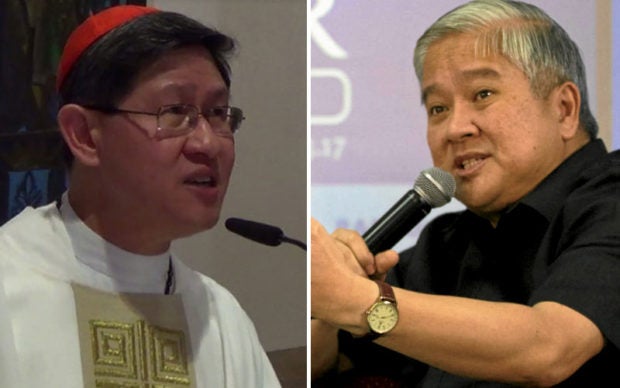 The two highest-ranking officials of the Roman Catholic Church in the Philippines on Sunday called for an end to the “waste of human lives” and withdrawal of public support for drug killings following a brutal week in President Duterte’s war on drugs in which a 17-year-old boy was among dozens killed.

The Archbishop of Manila, Cardinal Luis Antonio Tagle, called on the faithful to “reflect, pray and act” while the head of the Catholic Bishops’ Conference of the Philippines, Lingayen-Dagupan Archbishop Socrates Villegas, called on the nation to stop supporting the police killings of alleged drug offenders.

Villegas also called for churches to ring their bells for 15 minutes starting at 8 p.m. from Aug. 22 to Nov. 27 as a prayer offering for the victims of the police operations in Pampanga province and Metro Manila last week and as a reminder to the living to stop supporting the killings.

On Sunday, Cardinal Tagle expressed concern about the increase in the number of deaths.

“The illegal drug problem should not be reduced to a political or criminal issue. It is a humanitarian concern that affects all of us,” Tagle said.

The cardinal said the Archdiocese of Manila was willing to play host to a multisectoral dialogue on the drug problem.

Villegas, in a pastoral exhortation also read in churches on Sunday, deplored public support for the killings of drug suspects and called on the nation to summon up courage and oppose the killing of alleged drug offenders.

“They say that if there are 32 killed every day, our lives would be better, and our countrymen nod in agreement. They applaud and cry with a smile … while counting corpses in the night, while passing wakes for the dead left and right,” Villegas said.

The people, he said, needed to be courageous and openly disagree with Mr. Duterte’s stand that killing drug suspects will solve the country’s drug problems.

“It’s not in our nature to be happy over the killings,” he said.

Villegas said he wondered why only a few pitied the orphans and widows of slain drug suspects.

“Don’t we know how to weep? Why aren’t we shocked by the gunfire and flow of blood on the sidewalk? Why aren’t we angry at the flow of drugs from China? Why is it that it’s only the poor who are shot while if a rich person with connections with higher ups is tagged, there needs to be an investigation and affidavit first,” Villegas asked.

The Catholic Church, one of the nation’s oldest and most influential institutions, has been among the few voices denouncing the drug killings as polls show Mr. Duterte continues to enjoy widespread popularity.

During the 14 months Mr. Duterte has been in power, police have confirmed killing more than 3,500 people—insisting they acted in self-defense.

More than 2,000 other people have been killed in drug-related crimes and thousands more murdered in unexplained circumstances, according to police data.

The numbers saw a sudden increase last week, with Mr. Duterte praising the killing of 32 people in near-simultaneous police raids across Pampanga province on Monday and calling for more.

At least 44 people were killed in various cities in Metro Manila in succeeding days, including a 17-year-old boy whose death on Wednesday sparked a national furor.

Relatives of Kian Loyd de los Santos released closed-circuit television (CCTV) footage of the Grade 12 boy being dragged by two officers as they questioned a police report that he shot at them first.

“I don’t believe the police story that Kian Loyd, a Grade 12 boy, died because he fought back and engaged three policemen in a shootout using a cal. .45 [pistol]. The CCTV footage showed he was already in their custody. How could he have fought back?” said Caloocan Bishop Pablo David, who said Mass at De los Santos’ community on Saturday.

A Senate inquiry into the sudden surge in police killings of drug suspects can be expected, with senators supporting Mr. Duterte planning to file a resolution on Monday condemning the slayings, including the death of De los Santos.

Senate President Aquilino Pimentel III and the members of the majority bloc were meeting on Sunday to put into final form the resolution expressing the sense of the Senate over the slayings.

“Finalization of the resolution [on Sunday night]. It’s about 95 percent done. [Only styling left to be done],” Pimentel said in a text message to reporters.

Sen. Panfilo Lacson said Pimentel called the meeting to decide what action the Senate needed to take in the face of the killings.

“At the outset, the sense of the majority is for the Senate to investigate it. And it looks like there is a growing sentiment that the investigation be referred to the committee on public order and dangerous drugs,” Lacson said in a radio interview, referring to his committee.

Lacson said the inquiry could focus on the sudden “killing spree.”

“Is there an order to do so? Is there a pattern that every time the President speaks up and pushes the Philippine National Police, [there are] killings?” he said.

He said the Senate could revisit the justice committee’s finding last year that the deaths of alleged drug offenders were not state-sponsored extrajudicial killings.

Lacson said the recent killings were a cause for concern, adding that if there was a directive, then “it looks like it’s mutually contrived or orchestrated.”

Asked whether he believed the police had to meet a quota in the war on drugs, he said there was such talk and that it would be “dangerous” if indeed police were under pressure to deliver.

“If we can authenticate the CCTV [footage] that it was Kian really being dragged by two policemen and being killed, then we can see there is no deep planning or deep thought [in the operation] because the top leader supports the police,” he said.

Lacson said it was dangerous for the police to assume that Mr. Duterte would always back them up.

The PNP should reassess its narcotics operations, especially the one in Caloocan where De los Santos was killed, which was so “blatant,” Lacson said. —WITH A REPORT FROM AFP