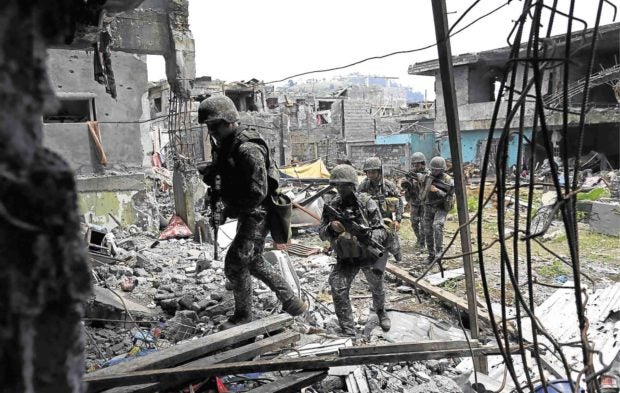 The recovery of the bodies, including one that appeared to be a foreigner, from two locations inside the main battle area brought to 64 the number of bodies and skeletal remains recovered this week alone.

Lt. Gen. Carlito Galvez, commander of the military’s Western Mindanao Command, said the 24 bodies were found in two buildings that gunmen from the Maute group and their allies occupied.

But in a press conference in Camp Aguinaldo on Wednesday, Maj. Gen. Restituto Padilla Jr., spokesperson for the Armed Forces of the Philippines, said 22 cadavers were recovered, some of whom were suspected to be remains of leaders of the Maute group.

“We are also interested to find out if there are prominent people … killed. This is the reason why we are asking the PNP (Philippine National Police) to conduct the DNA testing faster to identify [them], because one or two of them might be the leaders of this group,” Padilla said.

AFP chief of staff Gen. Eduardo Año had announced in September that the Maute brothers—Abdullah, Madi and Otto—had been killed in the fighting.

However, another brother, Omar, and Abu Sayyaf leader Isnilon Hapilon were believed to still be alive, Año had said.

Galvez said firearms were found near the bodies retrieved recently.

“They are all confirmed members of Maute and Abu Sayyaf [groups]. There were no indications they were civilians or hostages,” Galvez told reporters.

He said they were expecting to find more bodies inside the main battle area as soldiers continued to move toward areas occupied by gunmen spread out in about 4 hectares in Marawi.

About 800 Maute fighters have been killed since the fighting started here on May 23, military officials said.

At least 159 soldiers and 47 civilians were killed as the government engaged terrorists who laid siege to Marawi.

Padilla said an Army lieutenant was killed a few days ago in Marawi. The military, he said, was withholding the soldier’s identity pending notification of his family.

Galvez said he remained confident that with the deaths of more gunmen, the liberation of the city could happen soon.

“Of the total 93 villages here, our enemies are now confined in one village. We are very close to liberating the entire city,” said Col. Romeo Brawner Jr., deputy commander of the Joint Task Group Ranao.

Padilla, however, dispelled talk that the battle to retake Marawi will end this week.

He said while some military commanders gave a date and time for the end of the Marawi siege, “there is no categorical statement from the Armed Forces.”

“Our AFP chief, General Año said that even as we want to finish the battle immediately and help Marawi get back on its feet, we are not giving any exact date. If there were announcements on when the fighting will be over, it is not an official announcement and it is not a categorical statement from the Armed Forces,” Padilla said.

But he said even if the military wanted to speed things up, the presence of hostages and some noncombatants, like relatives of Maute gunmen, had slowed down their operation.

“We expect there might be a slowdown in our operations considering that our priority is to get the hostages alive,” he said.

He said three more hostages managed to escape from the main battle area this week and were being “processed” by the police’s Criminal Investigation and Detection Group.

Last week, 17 hostages were able to get out of the battle zone. Only nine former hostages, all of them male, remain in government custody.

Brawner said authorities were preparing for a massive retrieval operation supervised by the International Committee of the Red Cross here.

The retrieval of bodies and skeletal remains would take place after the military had cleared the battle areas of improvised explosive devices and other things that could harm members of retrieval teams.

On Monday, the Provincial Disaster Risk Reduction and Management Office, along with personnel from the Bureau of Fire Protection and the police’s Scene of Crime Operations (Soco), held a simulation exercise for the retrieval operation.

The retrieval operation will involve four teams with 14 members each.