Catholic Church in Albay speaks out vs EJK, violence 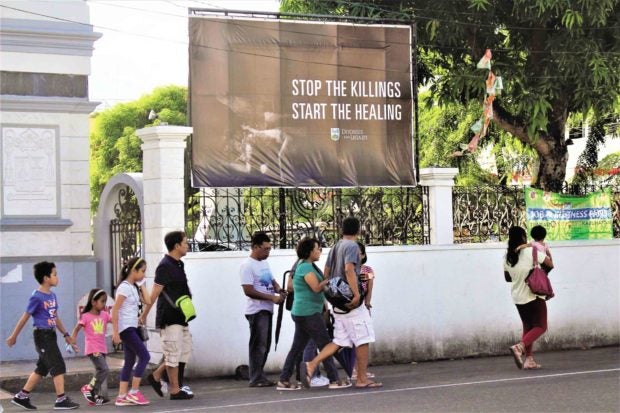 Tarpaulin streamers denouncing killings related to the government’s drug war are displayed in compounds of Catholic churches in Albay province. —MICHAEL B. JAUCIAN

LEGAZPI CITY — Hundreds of Catholic faithful in three cities of Albay province are staging simultaneous prayer rallies on Friday to launch a campaign calling for the end to killings under the Duterte administration.

Father Rex Arjona, executive director of the Social Action Center and spokesperson for the Diocese of Legazpi, said the activity was a church-based campaign to raise consciousness among the public on the spate of killings arising from the government’s war on drugs.

“We would like to awaken the people’s mind to our shared responsibility to stop the killings and start the healing process,” Arjona said.

The prayer campaign, called “Stop the killings; Start the healing,” was conceived by Albay Bishop Joel Baylon following a recent meeting with members of the Catholic Educational Association of Legazpi (Ceal).

Members of Ceal agreed to make the campaign a venue where the church would speak out when “human rights are trampled upon, the rule of law is set aside and democratic institutions are destroyed.”

According to Arjona, the church is expecting parishioners, students, members of people’s organizations and civic and religious groups to join the marches and prayer rallies in three vicariates of Albay.

The event will start at 3 p.m. on Friday with marchers converging at St. John the Baptist parish patio in Tabaco City, at St. Stephen Church grounds in Ligao City and at St. Gregory Cathedral grounds in this city.

The rally will be highlighted by Masses celebrated by Bishop Baylon at the Albay cathedral and by Bishop Lucilo Quiambao at the Tabaco church.

A candle-lighting ceremony will also be held on Friday while prayers will be offered in solidarity with families of victims of killings and violence.

As church bells in Albay continue to toll every night, Baylon reiterated his call for the Catholic faithful to unite against extrajudicial killings (EJK) in the government’s war against illegal drugs. Last year, the bishop, in an open letter to President Duterte, appealed for an end to the killings.

In his recent pastoral letter read in all churches in Albay, Baylon said: “It seems that our appeal fell on deaf ears and stony hearts. But the recent murders of several youngsters and attempts to restrain the promotion of human rights have awakened the consciences of many.”

Ren Manalo of the Gabriela Youth Southern Tagalog said the activity, led by its affiliate Samahan ng Kabataang Mindorenyo, was their way of responding to an earlier call by the Catholic Church to “mourn” the victims of the government’s antidrug campaign and call for justice for victims of killings.

“Every afternoon, around 5:30, the students and some professors light candles and hold discussions about EJKs,” Manalo said in a phone interview.

The activity started Sept. 23 at the OMSC main campus in San Jose town and in its campus in Sablayan.

“Once the school goes on its semestral break [next week], we also plan to hold the same activity in the communities,” she said. —WITH A REPORT FROM MARICAR CINCO