House impeaches Comelec chief after he said he was resigning 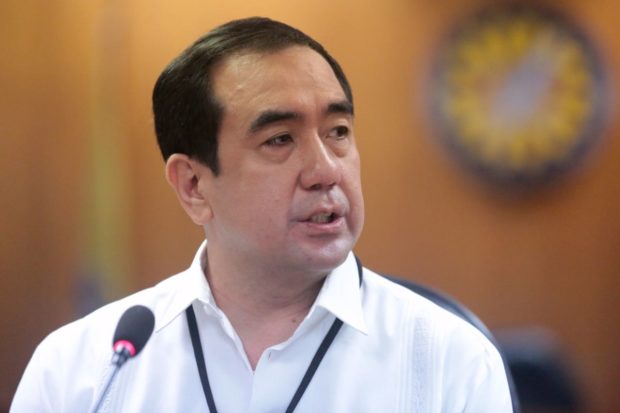 Hours after Commission on Elections (Comelec) Chair Andres Bautista announced on Wednesday his plan to resign on Dec. 31, the House of Representatives voted 137-75-2 to impeach him.

Members of the House justice committee, who earlier dismissed the impeachment complaint against Bautista for having a defective verification form, were outvoted in the plenary.

Deputy Speaker Raneo Abu directed the committee to prepare the articles of impeachment to be transmitted to the Senate, which will act as an impeachment court and hold
a trial.

Bautista is accused, among other alleged offenses, of amassing ill-gotten wealth and receiving “referral fees” from election technology contractor Smartmatic.

The Senate said it had no choice but to proceed with the trial of Bautista, as his resignation was prospective.

“If the House transmits the impeachment case to the Senate, we have to act on it,” Majority Leader Vicente Sotto III said on Wednesday night.

Sotto said the impeachment trial may start in the last week of November or first week of December.

Sen. Francis Escudero pointed out that while Bautista announced his intention to resign, he had not quit his post, making impeachment an available procedure.

But for Sen. Francis Pangilinan, proceeding with the trial despite Bautista’s resignation would be a waste of time since the penalty for conviction in an impeachment trial was removal from office.

Bautista said the House move to impeach him was unnecessary since he had announced his plan to resign by the year’s end.

But the Comelec chair said he would abide by the Constitution and relevant rules of the impeachment process.

“It is unfortunate that the decision of the House committee on justice, which was voted upon twice by a vote of 26-2, to dismiss the impeachment case against me was overturned this afternoon by the House of Representatives,” he said in a statement.

At a forum shortly after he announced his decision on social media, Bautista said he was stepping down on Dec. 31 for an orderly transition in the Comelec.

“The approximate 10-week period is meant to provide you, Mr. President, sufficient time to choose my replacement as well as ensure a smooth and orderly transition within the commission,” Bautista said in a resignation letter dated Oct. 11 that he submitted to President Duterte.

The term of Bautista was supposed to expire on Feb. 2, 2022. He was appointed by President Benigno Aquino III to the Comelec on April 28, 2015.

Hours before he was impeached, Bautista said he arrived at the decision to step down by taking his family into consideration.

“This was not an easy decision, but my family, especially my children, need me now more than ever,” Bautista said.

Bautista’s estranged wife, Patricia, earlier publicized their marital woes and alleged that he had amassed unexplained wealth of nearly P1 billion, the bulk of which he did not declare in his statement of assets, liabilities and net worth. He denied his wife’s allegations.

Bautista said he also took into consideration the Comelec’s credibility.

“There are two things I considered—the healing of wounds of my family and the credibility of the commission. Those are the basis why I feel that this is the right thing to do,” he said.

Bautista said he was ready to face allegations against him at a proper forum so he could clear his name.

In the House, many of the 75 lawmakers who voted against Bautista’s impeachment belonged to the justice committee led by Rep. Reynaldo Umali.

They voted on Wednesday afternoon to adopt the committee report dismissing the complaint of former Negros Oriental Rep. Jacinto Paras and lawyer Ferdinand Topacio due to a defective verification form.

But they were outvoted by 137 lawmakers, or more than the one-third threshold (98 lawmakers) required by Section 11, Article 3 of the Rules of Procedure in Impeachment Proceedings to override the justice committee’s recommendations.

Deputy Speaker Gwendolyn Garcia also objected to Umali’s motion to adopt the justice committee report, saying Bautista “must be given the opportunity to be heard.”

Before Bautista was impeached, Senate Minority Leader Franklin Drilon said the resignation was “the best thing that he (Bautista) can do so that he can take care of his problems.”

Sen. Panfilo Lacson said Bautista’s resignation was “the decent thing to do.”

The Parish Pastoral Council for Responsible Voting described Bautista’s decision to resign as “laudable and praiseworthy.”

Comelec Commissioner Arthur Lim said Bautista made a “gutsy decision,” while fellow Commissioner Rowena Guanzon said the poll chief’s decision was good “so he will have peace of mind and focus on his children.” –With a report from Leila B. Salaverria