After “much prayer and discernment,” Commission on Elections (Comelec) Chair Andres Bautista announced on Wednesday his decision to resign from his post by the end of the year.

“It is with my deep sadness that I am informing you about my decision to resign as the chair of the Commission on Elections by the end of the year,” Bautista said in an open letter posted on his social media accounts.

It was addressed to his “Comelec family.”

“After much prayer and discernment, I believe that this is the right time to step down given the postponement of the Barangay and SK elections.”

“This was not an easy decision, but my family, especially my children, need me now more than ever,” he said.

Bautista’s resignation came less than a month after the House of Representatives junked an impeachment complaint against him over his alleged unexplained wealth.

His wife, Patricia, claimed that he might have amassed nearly P1 billion in ill-gotten wealth. The Comelec chief has repeatedly denied the allegation.

In the letter, Bautista thanked his Comelec family for the love, prayers and support that they showed him “most especially during my most challenging times.”

“Amid the hurtful, baseless and malicious accusations hurled against me, most of you never left my side,” he said.

“From the bottom of my heart, thank you, my Comelec family. It has been a joy and privilege to work for, and serve with you,” he added. /cbb 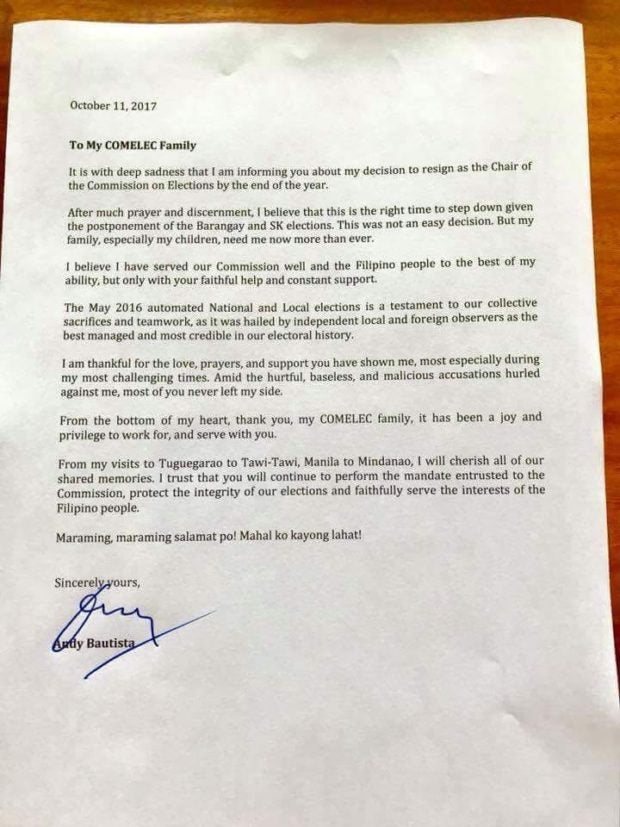